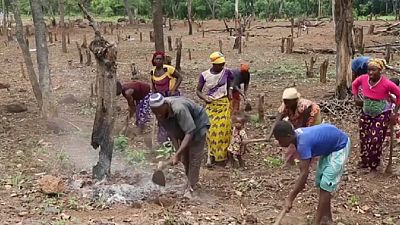 <p>Farmers in Guinea are complaining of the drought threatening their livelihoods due to deforestation.</p> <p>“We are suffering today because it doesn’t rain here any more. It doesn’t rain anymore. When you talk about the Guinee Forestiere region, over there, yes, it rains there. It rains there. But here in Upper Guinea, there’s no rain. And the sun is hot, and the land is hard. We can’t dig it. Our hands suffer,” said Ibrahim Toure, farmer in Faranah region, in Upper Guinea. </p> <p>It is the start of the rainy season in Guinea but farmers says there hasn’t been even a drop on the ground yet. The season which goes through June to September with occasional storms.</p> <p>“Climate change has caused a shortage of rain and as we are not getting any rainfall and is very difficult for us to farm, we cannot plant our rice seeds because of the lack of rainfall. We cannot do better farming this year, by June we should have finished farming but now, the month is almost over and we haven’t started farming,” said Qulare Mohamed, farmer in Faranah region, in Upper Guinea. </p> <p>Other parts of Guinea enjoy a much longer rainy season running from April to November. The farmers say logging of the forest in higher altitudes is to blame for the lack of rain.</p> <p>Toure says, “What’s causing this is the logging in the woods, because people can’t cut down trees that are high up. It’s affecting the rainfall. And the logging activities are part of the reason for the lack of rainfall. You see, with the way the environment is being polluted, it just can’t go on. We need to stop cutting down the trees. It’s that that’s stopping us work. If not we’ll get to a stage were everything is destroyed. Even if it isn’t complete destruction – it will be most of it. “</p> <p>A report published by the Guinean government in July 2018 says that the country is at risk due to climate change and must mitigate the risks, noting that only 60% of its forests are protected.</p> <p>The Ministry of the Environment estimates that Guinea loses around 35,000 hectares of forest each year. Climate experts have linked deforestation to drought severity.</p> <p>‘‘The regional plan. What have we noted? That for years and years we have been behaving in an uncontrollable way towards our vegetation. We destroy the forests, we diminish vegetation with bush fires and we destroy the vegetation. And that has a very negative impact on the rainfall,” said Mamadou Lamine Bah, Guinea’s National Director of Meteorology agrees with the farmers’ assessment.</p> <p>Aside from the oceans, tropical forests are the most important regions on the planet for putting water vapour in the air, which eventually becomes rainfall.</p> <p>Experts say deforestation also impoverishes the soil, reduces rainfall and aggravates flooding when the rains do come.</p> <p>‘‘We need to plant trees. It is these trees that will help restore the landscape, they will help not only to capture the gasses that the community emits into the atmosphere, but they will also help to cover the land,” says Mamadou Lamine Bah, Guinea’s National Director of Meteorology agrees with the farmers’ assessment.</p> <p>The Government announced a tree planting programme to help combat drought. The first trees will be planted in Middle Guinea at the start of August.</p>

We need to plant trees. It is these trees that will help restore the landscape.