Dozens of people demonstrated in the streets of Khartoum, Sudan on Saturday. They were against findings of an investigation into the brutal repression of a sit-in by demonstrators in June.

On amateur videos posted to social networks, they can be seen burning tires and chanting slogans against the Burri district committee, charged with shedding light on the protest break-in

The protesters are against the committee’s findings, which indicates that 87 people were killed during the 3 June protest.

The report indicated that the number of martyrs was less than 90, with more than 87 dead and 63 wounded, when the reality says otherwise.

“The report indicated that the number of martyrs was less than 90, with more than 87 dead and 63 wounded, when the reality says otherwise. More than 130 have been identified by the Central Committee of Physicians,” said Ismail al-Taj, spokesman for the Sudanese Professionals Association.

The findings attribute full responsibility for this tragedy to members of the security forces. They claim the forces allegedly fired live ammunition at demonstrators who were demanding that the army share power.

“It is clear to the committee that there were two unidentified masked persons in the sit-in area who fired bullets. In addition, three unidentified persons fired bullets at the demonstrators from the top of the Al-Bashir Medical Complex building’‘, said Fatah al-Rahman Saeed, Prosecutor who led the investigation.

The victims of the incident were part of the sit-in outside army headquarters since April 6, the epicenter of the protest movement that began in December 2018.

The protesters were demonstrating against a further increase in the price of bread that finally led to the fall of President Omar al-Bashir’s regime.

Bashir was arrested by the army on April 11. 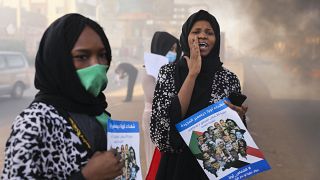