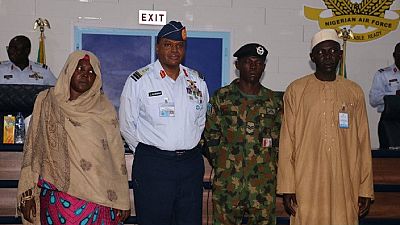 He found and returned a parcel that contained 37,000 euros while he was on patrol, the Nigeria Air Force, NAF, announced that he was due to be rewarded. This was the story of Bashir Umar, an Aircraftman, ACM.

Chief of Air Staff, Air Marshal SB Abubakar ordered that processes be undertaken: “to immediately come up with modalities to reward the airman so as to encourage other personnel of the Service to continue to embody attitudes and behaviours that reflect NAF’s core values of Integrity, Excellence and Service Delivery.”

On Thursday, July 25, the Chief of Air Staff delivered the said reward for Bashir’s integrity and for giving the Force a good name with his actions.

ACM Bashir Umar waés decorated with the new rank of a corporal, which according to reports automatically meant a double promotion in the NAF hierarchy.

The ceremony at which he was awarded was attended by other high-ranking officials of the NAF and by relations believed to be his parents. He was clad in his full attire as he received a document from the Chief of Staff.

Chief of Air Staff, Air Marshal SB Abubakar on Thursday, July 25, decorated ACM Bashir Umar with the new rank of Corporal, which automatically means a double promotion for the NigAirForce personnel who returned €37,000 he found at Kano Airport to its owner on Sunday, July 7 pic.twitter.com/TnvAb8t9ps

His story was widely reported by news portals at home and across the world. Social media users also commended and condemned his actions – with seriousness and others in jest.

Describing the episode on its official Facebook page, the NAF said: “The incident occured at the Hajj Camp Market in Kano on Tuesday 16 July 2019, when ACM Bashir, who is a member of the NAF Mobile Air Defence Team (MADT) deployed for airport security duties…

“… while on routine patrol with some of his colleagues, found the money in a parcel. Fortunately, there was a phone number on the parcel which the Airman called, and eventually handed over the package to the owner.”

President Buhari also congratulated Bashir via a statement issued by his senior special advisor on media and publicity, Femi Adesina, earlier this week. The statement read as follows:

“Describing such honesty by ACM Umar of the Nigerian Air Force (NAF) Mobile Air Defence Team at the Hajj Camp Market in Kano as “uncommon, patriotic and exemplary,” the President enjoins Nigerians, especially the youth, to emulate such worthy gesture.

“According to President Buhari, “Honesty and integrity will always remain admirable virtues, notwithstanding challenges before any country.”

“He also applauds the leadership of the NAF for its decision to “reward the airman so as to encourage other personnel of the Service to continue to embody attitudes and behaviours that reflect NAF’s core values of Integrity, Excellence and Service Delivery.”

In August 2018, two private security guards at Nigeria’s Muratala Muhammed International Airport were awarded for their honesty in the line of duty.

The two, junior security guard Achi Daniel and his supervisor Francis Emepueaku, according to the federal airports authority, returned a forgotten bag with large sums of money and expensive items. The two worked at the multi-level car park at the Lagos airport.