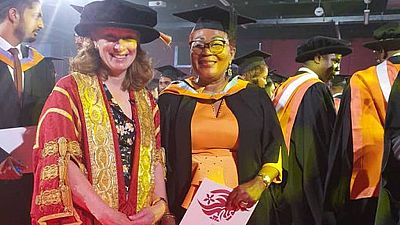 The former First Lady according to the Daily Graphic report had studied as a long-distance student over the period she was enrolled.

She already holds a Master’s Degree in Governance and Leadership plus a first degree in Hospitality Management from one of the country’s prestigious varsities, the Ghana Institute of Management and Public Administration (GIMPA).

She had in her time as First Lady championed causes in the interest of women and children and was a key member of the Organization of African First Ladies.

The 56-year-old is wife of John Dramani Mahama who served as president from 2011 till 2016. He had previously served as Vice-President to John Atta Mills who died in office.

Mahama served out Mills’ tenure before winning a substantive first term in 2016. He failed to secure reelection in 2016 when incumbent Nana Addo Dankwa Akufo-Addo defeated him at the polls.

Mahama has been chosen by the main opposition National Democratic Congress, NDC, to lead the party into the upcoming December 2020 elections. Akufo-Addo will be contesting for a second and final term.