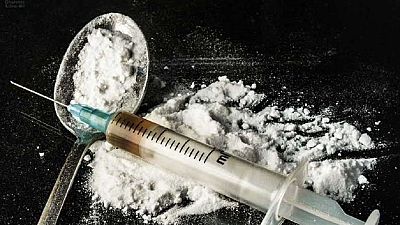 Ashley Abrahams, a 37-year-old homeless man, is one of over 100,000 regular heroin users in South Africa, according to a survey published in March by European project ENACT, which fights organised transnational crimes.

Heroin has been wreaking havoc in South Africa’s cities and rural areas since the early 2000s, with a trafficking market generating about 3.6 billion rand ($260 million) in annual revenue.

“What happens is that it comes in a form of powder and then I throw a liquid on it, water, and then I cook it up and then I inject it. Basically for me it’s only to take the pain away.I actually don’t have a main reason for using it. But it was basically just to fit in. Peer pressure plays a bigger role in that thing. And I was just stupid. Like I said I regret the day I used the drug. I regret the day because I didn’t know about the withdrawals, nobody told me about the withdrawals, nobody told me about the effects it’s gonna have on me.”

Ashley added that heroin is one of the many survival strategies they use to survive on the street.

“Nobody can sleep sober on the street, you will die of the cold. Why do you think most of the people survive on the street ? Because there’s something in their system, there’s something toxic in their system that keeps them warm and helps them,” he confessed. According to Robert Michel, executive director of Outreach Foundation, a nongovernmental organisation which helps needy young people, “out of five we send to rehab maybe one will stay clean for at least six months. And we usually loose them out of our sight and we don’t know whether a year or two years later they’re still out of drugs or have come back. That, we don’t know. So at best, at best, I’d say our success rate is about 20% but it could be much less actually.”

Despite the very low success rate recorded so far, Robert says there is light at the end of the tunnel.

“There’s always hope, there has to be hope. Otherwise, what would we do here on earth ? The sun is shining again tomorrow, in Africa at least where the sun is always shining, and that gives us hope and that pushes us on. Yes, we know it’s probably a lost battle but I still think it’s worth doing it.”

Many streets across South Africa have become drug supermarkets, a practice that has been strongly condemned by NGOs and experts, who accuse the police and the government of passivity at its best and complicity at its worst.