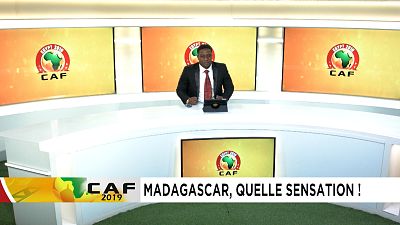 Hello and thanks for joining us on today’s special Afcon 2019 where qualification into the knock out stage comes with arguably the surprise of the competition Madagascar ranked 108 on world ranking exorcised the 2013 Champions Nigeria 2-0 to finish as group B leaders. In their madden participation in this competition, this is a record that will last for a while on the continent as they bagged two victories, a draw making 7 points.

The Leopards of the DRC saved the best for last as they demolished Zimbabwe 4-0 yesterday in what is considered the best result this far in the tournament. On 3 points with a neutral goal difference and a 4 goal scored advantage, the DRC can still hope to qualify, meanwhile host Egypt made it 3 out of 3 with a 2-0 win over Uganda to top group A. Mohamed Salah is already on two goals.

The quest for qualification continues today In Group D. A draw will be enough to see Morocco through against South Africa but their head coach says they will not be lowering the bar in that encounter.

A narrow defeat to group leaders Morocco is what the Ivorians will want to quickly bury and focus on qualification. Ibrahim Camara knows nothing short of victory is acceptable for the 2015 champions.

There is still a great margin for surprises as the tamed Terranga Lions take on a revived Kenyan side that can quickly overturn results. Both sides are locked on 3 points behind group leaders Algeria who will play against Tanzania. Aliou Cisse of Senegal says his side has swallowed the bitter pill from their last defeat and look forward to qualification.