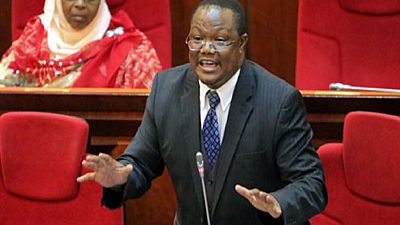 <p><strong>Tanzanian opposition figure and critic of President John Magufuli, Tundu Lissu was dismissed from his post as a member of parliament, the Speaker of the National Assembly announced on Friday.</strong></p> <p>Lissu was seriously wounded in a gun attack in 2017. After being treated in Kenya, he was moved to Belgium for further management.</p> <p>His Chadema party claims the attack was politically motivated. </p> <p>“I would like to inform you that I have already notified the Electoral Commission that the seat of Singida East, which was occupied by our comrade Tundu Lissu, is vacant and that the Commission can initiate the process to fill the seat,” said National Assembly President Job Ndugai on Friday evening at the end of the parliamentary session.</p> <p>Lissu was a potential opposition candidate for the 2020 presidential election and was the Member of Parliament for Singida East in northern Tanzania.</p> <p>He added that Lissu “excluded himself” from Parliament “by violating the constitution”: “He did not inform the Speaker of the National Assembly of his whereabouts, nor of his condition, and did not make a declaration of assets and debts, an exercise provided for by the Constitution and which we must carry out every year”.</p> <p>Tundu Lissu, quoted by the Tanzanian daily Mwananchi, said he would “consult my lawyers as soon as possible to decide what to do next”. “As for my return (to Tanzania), nothing changes, I return on September 7,” he added.</p> <p><strong>Opposition increasingly targeted</strong></p> <p>There was no immediate reaction from Chadema to Tundu’s dismissal.</p> <p>A former President of the Tanzanian Bar Association, Lissu was attacked on 7 September 2017 at his home in Dodoma, the country’s administrative capital, after participating in a parliamentary session. He had been hit by several bullets.</p> <p>Tanzania’s authorities, despite pledging to investigate the attack, have yet to make any arrests.</p> <p>The opposition in Tanzania has been the target of arbitrary arrests, intimidation and violence since president Magufuli came to power in 2015.</p> <p>Earlier in 2019, the country’s parliament, dominated by the ruling Chama Cha Mapinduzi (<span class="caps">CCM</span>) party passed a law effectively outlawing the activities of opposition parties outside the electoral calendar.</p> <p><strong><span class="caps">AFP</span></strong></p>