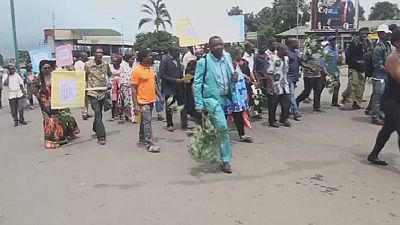 Separatist groups active in the English-speaking regions of Cameroon have been accused of torture and abuses against civilians.

These allegations were made by Human Rights Watch NGO on Monday criticizing the acts in a statement.

The organization claims to have watched a video, filmed in mid-May, showing “armed separatists torturing a man in an abandoned school in the north-western region of Cameroon”.

Separatist groups active in the English-speaking regions of Cameroon have been accused of torture and abuses against civilians.

According to the NGO, dozens of other people have been tortured.

Since the beginning of the crisis in 2016, most schools have been closed due to the blockade imposed by the separatists.

Today, these regions are the scene of armed conflict that has continued to grow and in which civilians are caught in between.

Elements of the armed forces are also regularly accused of committing acts of violence against civilians.

This crisis has already pushed more than 530,000 people out of their homes, according to UN figures. In twenty months, the conflict has killed 1,850 people, according to the International Crisis Group, a centre for geopolitical analysis.