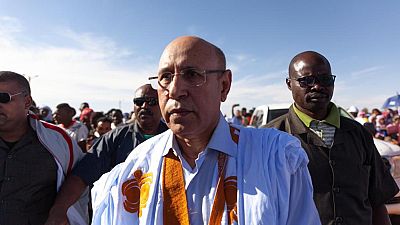 The presidential candidate for Mauritania’s ruling party, Mohamed Cheikh El-Ghazouani, has declared himself the winner of the country’s general elections on Saturday night in the first round, while the results were still being compiled.

Mr. Ghazouani made this statement before dawn in front of a crowd of his supporters, after an election vigil in the presence of outgoing President Mohamed Ould Abdel Aziz, according to journalists present.

Mauritanians came in large numbers on Saturday to elect their president, who will have to preserve the stability that this vast Sahelian country has won so dearly, but also ensure its economic development and advance respect for human rights.

Our candidate will pass with flying colours in the first round.

This election should mark the first transfer of power between two presidents elected in this country shaken by numerous coups d‘état from 1978 to 2008, the date of the putsch of Mohamed Ould Abdel Aziz, who was then a general. The outgoing president could not stand for re-election after two terms.

But the opposition candidates, four of the five opponents of Mr. Ghazouani, also a former general, denounce a desire to perpetuate a “military” regime and the risk of fraud. They have pledged to support each other in the event of a second round on July 6.

The candidate for power indicated that he claimed victory on the basis of 80% of the ballots counted. “There is only 20% left, but that will not change the final result,” he said, according to the same sources. His election was also claimed on a Facebook page of his campaign.

Mr. Ghazouani received 50.56% of the votes on 80% of the ballots counted, ahead of opponents Sidi Mohamed Ould Boubacar and Biram Ould Dah Ould Ould Abeid, both around 18%, according to a source at the National Independent Electoral Commission (Céni), while the compilations were ongoing.

None of Mr. Ghazouani’s five competitors reacted immediately to the announcement, but four of them, including Mr. Ould Boubacar and Mr. Ould Abeid, denounced irregularities and the expulsion of their representatives from certain polling stations during a meeting on Saturday afternoon.

But the Céni had stated that it had not identified any significant incidents, as had Mr. Ghazouani’s campaign team.

“Our candidate will pass with flying colours in the first round,” said his spokesman, Sidi Ould Domane, at a press conference just before the polling stations close on Saturday at 7pm.

Earlier, Mr. Ould Boubacar, former head of the transitional government (2005-2007), had reported “worrying signs”, citing in particular the absence of international observers and the unbalanced composition of the Céni in favour of the government, according to the opposition.

The opposition has expressed its conviction that a majority of Mauritanians are “willing to change”.

But Mr. Ould Abdel Aziz has repeatedly predicted a “backtracking” to the periods of instability that the country has experienced if its long-time comrade-in-arms is not elected.

It stabilized the country hit in the 2000s by jihadist attacks and kidnappings of foreigners by pursuing a proactive policy: rebuilding the army, increasing surveillance of the territory and developing remote areas.

Critics focus on fundamental rights in a society marked by persistent disparities between Arab-Berber, Haratina (descendants of slaves of Arab-Berber masters, whose culture they share) and Afro-Mauritanian, generally native speakers of sub-Saharan ethnic groups.

Economic growth, at 3.6% in 2018, although improving, remains insufficient in relation to demographics, according to a World Bank (WB) report published in May.

The World Bank welcomes the restoration of “macroeconomic stability”, with annual growth projections averaging 6.2% over the period 2019-2021. But it calls for the removal of obstacles to the private sector, citing first and foremost the difficulties of “access to credit” and “corruption”.