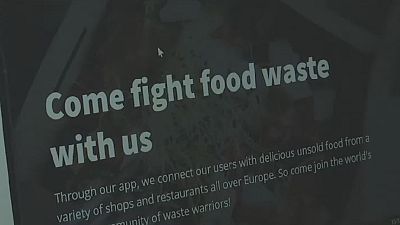 In recent times, foods can no longer go to waste in most restaurants in Germany, owing to a mobile application by Tech-startups; which shows were leftovers are being sold.

This is part of a growing movement of environmentally-aware people who are using modern technology to help reduce food waste.

A user of the app, Fiesinger says it’s a win, win situation. She gets a cheaper meal, the businesses make some money rather than throwing away food, and of course overall it means less is being wasted.

“My primary concern is to counter environmental pollution, which I try to counter in different ways and this is the easiest way to do something every day. It’s super simple, you download the app and then I look to see where I can take away something on the way home,” says Fiesinger.

The app is one of a number of services using technology to help solve the problem of food waste.

Some environmentally conscious people have built online communities that share food with their neighbours, rather than throwing it away.

Tech-startups have teamed up with supermarkets to create applications that alert consumers to groceries which are being marked down in price before the sell by date expires.

Franziska Lienert from the company “Too Good To Go” explains:

“Our portions are always half of the original price. The profile always shows the approximate number of meals the customer can expect, the size of the meal, how many portions are left and at what time the meal can be picked up, always shortly before closing time.”

Even the German government has launched a phone app offering recipes by celebrity chefs made specifically for left-over groceries which otherwise may be discarded.

Julia Kloeckner is the German Minister for Agriculture and Consumer Protection.

She says: “There are about 11 million tonnes (of food) we throw away, that is more than ten thousand truck loads – just imagine that. And that amount is the same as stopping six million tonnes of CO2, it’s an unbelievable amount. After all, we have important resources in these foodstuffs and if we throw them away it is really something that is difficult to justify ethically.”

On average, every German throws away more than 55 kilograms (120 pounds) of food every year according to the government.

In February this year the country’s leader, Chancellor Angela Merkel stepped into the debate with this podcast.

Merkel warns: “We have to be conscious about food, every single one of us. Statistically, every German citizen throws away 55 kg of food every year, one third of it fruit and vegetables.”