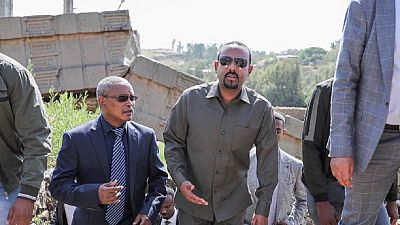 Prime Minister of Ethiopia, Abiy Ahmed is in the northern Tigray region where he has held a series of meetings with stakeholders over a wide range of issues.

Abiy and his delegation were met on arrival in the region by its Vice President Dr Debretsion Gebremichael.

One of his main engagements had to do with efforts aimed at saving a historic obelisk located in the city of Axum. Together with his host, they reviewed “the current status of the obelisks,” his office said.

Ethiopia fought for years for the monument to be returned from Italy after it was taken away by Italian invaders. Abiy’s move is the latest in a series of efforts that saw the Minister of Tourism also visit the site last month.

Whiles the main structure according to reports remain well managed, other minor portions of the obelisk have collapsed due to weakened foundations hence in dire need of rehabilitation to arrest further deterioration.

“The one being reviewed is the ‘King Ezana’s Stele’ still standing but requiring preservation work,” a spokesperson from the office of the Prime Minister wrote in a Twitter clarification.

The Axum Obelisk is a testament to Ethiopia’s historic civilization. PM Abiy Ahmed and his delegation, together with Tigray Region Vice President Dr Debretsion Gebremichael, are currently in Axum reviewing the current status of the obelisks.#PMOEthiopia pic.twitter.com/kc53skd59Y

Return of the obelisk and Pankhurst’s impact

The axum stelae as it is known was re-erected in 2008. The 1,700-year-old giant stone obelisk was taken to Italy by fascist invaders in the 1930s and remained there until it was restored to its historic site in an ancient northern town.

The Ethiopian government in 2017 mourned one of its greatest historians, Dr Richard Pankhurst, who died at the age of 90, for his role in helping to secure the return of the monument.

The country’s Foreign Ministry in a statement at the time referred to Pankhurst as a ‘‘doyen of historians and scholars of Ethiopia,’‘ it added that he ‘‘was one of Ethiopia’s greatest friends during his long and productive life, and his scholarship and understanding for Ethiopia will be sorely missed.’‘

He had earlier received an award of recognition from ex-President Teshome Mulatu for the crucial role he played in the campaign for the return of a historical monument.