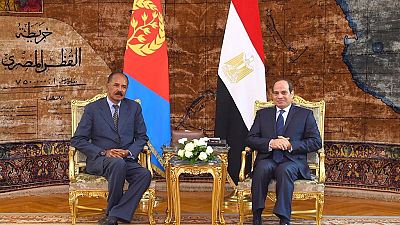 <p>Presidents of Eritrea and Egypt have asked Sudanese to act responsibly in the midst of a protest push for civilian transition after the ouster in April of long serving Omar Al-Bashir.</p> <p>Isaias Afwerki arrived in Cairo on Saturday to meet his Egyptian counterpart Abdel Fattah Al-Sisi. The two leaders met at the presidential palace for talks spanning bilateral relations and issues on the African continent.</p> <p>On the subject of bilateral relations, they agreed to strengthen comprehensive existing cooperation and on issues relating to regional cooperation focused on Red Sea & Horn of Africa.</p> <p>Eritrean Minister of Information wrote on Twitter: “President Isaias Afwerki and President Abdel Fattah El-Sisi further expressed concern about developments in the Sudan and called on the Sudanese people to address the demands of the transition period with responsibility and to resist undue external meddling.”</p> <p>Egypt which shares a northern border with Sudan is largely seen as a “meddler” in the affairs of post-Bashir Sudan along with Saudi Arabia and the United Arab Emirates.</p> <p>Eritrea also shares an eastern border Sudan. The border was only opened earlier this year at a time protests were spreading against Bashir. Eritrea’s embassy in Sudan issued a security advisory at the height of the protests.</p> <p>Al Sisi is the current African Union president which during the week suspended Sudan over violence targeted at unarmed protesters and failure to establish a civilian transition after the ouster of President Omar al-Bashir.</p> <p>Eritrea had before the suspension slammed the AU of being weak and complicit in the manner in which developments were happening in Sudan.</p> <p>Asmara has in the past sent a delegation led by Foreign Minister Osman Saleh. Whiles in Khartoum, they met with leaders of the Transitional Military Council, <span class="caps">TMC</span>, and leadership of the protest leaders – Forces for Freedom and Change, <span class="caps">FCC</span>.</p> <blockquote class="twitter-tweet" data-lang="en"><p lang="en" dir="ltr">President Isaias Afwerki & President El-Sisi held broad discussions on bilateral relations & regional developments. They agreed to strengthen comprehensive bilateral cooperation. The exchange on regional cooperation focussed on Red Sea & Horn of Africa. <a href="https://twitter.com/hashtag/Eritrea?src=hash&ref_src=twsrc%5Etfw">#Eritrea</a> ?? <a href="https://twitter.com/hashtag/Egypt?src=hash&ref_src=twsrc%5Etfw">#Egypt</a> ?? <a href="https://t.co/V0ZFlC3i0M">pic.twitter.com/V0ZFlC3i0M</a></p>— ድግሳ ዓባይ ?????? (@EriAsmarino) <a href="https://twitter.com/EriAsmarino/status/1137497913251291137?ref_src=twsrc%5Etfw">June 8, 2019</a></blockquote> <script async src="https://platform.twitter.com/widgets.js" charset="utf-8"></script>