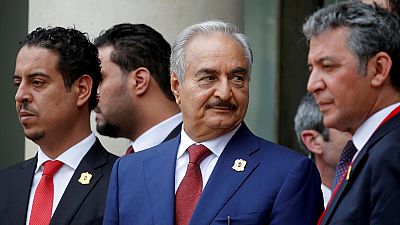 Eastern Libya’s renegade military commander Khalifa Haftar has ruled out a ceasefire, saying he wants to get rid of groups from the capital that have “infested” the United Nations-backed government during a meeting with French president Emmanuel Macron in Paris.

When the question of a ceasefire was mentioned during the meeting, Haftar asked quote: ‘negotiate with whom for a ceasefire’ end of quote.

Khalifa Haftar rejected suggestions he or forces loyal to him were benefiting from oil sales in the east of the country.

negotiate with whom for a ceasefire.

Macron and French officials have for weeks repeated their official support for the Government of National Accord based in Tripoli and have called for an unconditional ceasefire. But some European countries, including France, have also supported Haftar as a way to fight Islamist militants in the country.

The battle for Tripoli has killed at least 510 people, forced 75,000 out of their homes, trapped thousands of migrants in detention centers, and flattened some southern suburbs.

It has also forced closures of schools, split families on different sides of the front line, and brought power cuts.

The flare-up in the conflict in Libya – which has been gripped by anarchy since Muammar Gaddafi was toppled in 2011 – began in early April, when Haftar’s Libyan National Army advanced on the capital Tripoli. The LNA is now bogged down in southern suburbs by fighters loyal to Prime Minister Fayez al-Serraj’s Government of National Accord (GNA).