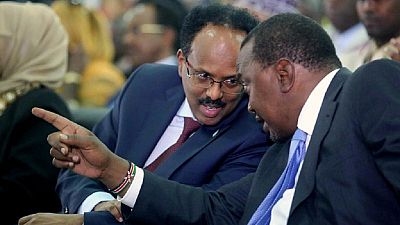 Somali news outlets reported late Monday that Kenya had denied a number of lawmakers access into the country, the latest round of a diplomatic standoff between the two neighbours.

“Dalsan Media has learnt that the Somali Embassy in Nairobi unsuccessfully interced on behalf of the three,” they added in a follow up tweet.

Reports indicate that the trio are expected to return to Mogadishu on Tuesday morning and are likely to spend the night at JKIA.

A Voice of America journalist disclosed that all three persons were carrying diplomatic passports by the Kenyan authorities roundly rejected issuing them visas.

Harun Maruf quoted sources that said other government officials who were allowed into Kenya were those that produced alternative passports upon the refusal of the Somali version.

In February this year, Kenya summoned its ambassador to Somalia, saying it was protesting a decision by the Mogadishu government to auction oil and gas exploration blocks at the centre of a maritime territorial dispute in the Indian Ocean.

Abiy’s flew with Somali president from Addis Ababa to Nairobi with his office saying after the meeting: “As an outcome both agreed to work towards peace & to take measures in addressing particular issues that escalated the tensions.”