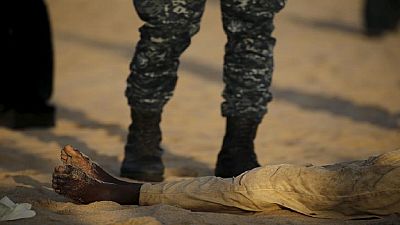 Nine people have died and at least 84 injured in Beoumi, a small town in central Côte d’Ivoire, following ethnic violence for three days this week between indigenous (Baoulé) and non-indigenous (Dioula or Malinké, northern nationals) populations.

An altercation between a taxi driver (Malinke) and a commercial motorbike rider (Baule) on Wednesday turned into a battle in the city and then surrounding villages, according to witnesses.

The clashes spread to the village of Kongonoussou, separated from the city by a bridge over a dam.

“At about 9am on Thursday, I saw a crowd coming from Beoumi. Malinke youth armed with clubs, machetes and 12-gauge guns… They started shooting, I ran home. I was able to tell my cousin who went out with her two children,” says Désiré Kouamé, a Baoulé, who explains that he was injured in the back when he “wanted to go home to get my two old out”.

Once the attackers left, Désiré returned home on fire and was able to take out the burned bodies of his aunts Zouzou Wô Ngo (95 years old) and Juliette Yobouet (75 years old).

The small brick house is charred, there is almost nothing left of it, kitchen utensils are on the floor, blackened by smoke…

“We’ve lost everything,” he said, haggard.

The teacher’s house also went up in smoke. In the middle of what was once the living room, lays the carcass of a motorcycle.

“They attacked him with a machete and shot him twice in the legs. All because he’s a Baule,” a villager swore.

Hundreds of military and gendarmes have been deployed throughout the area to avoid further clashes.

Tension remains high between the two communities who look at each other like a tile dog. Many still want to fight it out.

Some residents say that members of the Malinke community are still missing.

Each of the two communities lives in its own neighbourhoods. The market is closed, as are all shops and gas stations.

Shops and houses around the market were looted and burned down.

Transport has been interrupted while army patrols travel between burnt-out cars.

Inter-community clashes, sometimes deadly, are frequent in Côte d’Ivoire, a country of about 25 million inhabitants with several dozen ethnic groups.

The municipal elections (October 2018, some of which took place in January) were marked by violence that killed several people in the country.

Many people expect the October 2020 presidential elections to be tense.