Everything you need to know about Malawi's tripartite 2019 election 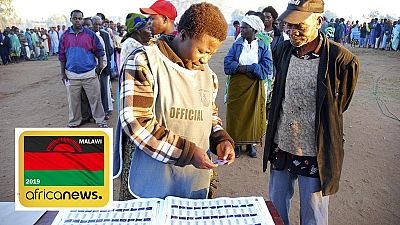 Malawians will head to the polls on Tuesday 21 May 2019, casting their votes to elect a president, members of parliament and local government councillors.

‘‘Those that will be elected on that day will serve the country in various capacities in the next five years,” Dr. Jane Ansah, chairperson of Malawi’s Electoral Commission (MEC) said in February.

Incumbent president Peter Mutharika will be seeking a second and final term, while his vice president, Saulos Chilima, quit the ruling party in 2018 and is running to defeat his boss.

Under Malawi’s electoral system, the president and vice president are elected on one ballot, making it impossible for the head of state to fire his deputy, even when they fall out during the course of a single term of office.

This election will be the first to be conducted under the new 2018 Political Parties Act that regulates funding of parties, and outlaws the practice of giving handouts during election campaigns.

In the lead up to the election, several parties made efforts to join forces including Chilima’s UTM and Banda’s People’s Party. This partnership lasted just a few days.

The ruling Democratic Progressive Party (DPP) entered into a coalition with the Democratic People’s Congress, while the opposition Malawi Congress Party (MCP) has been endorsed by the Freedom Party and the People’s Party for presidential elections.

An opinion poll conducted by the Institute of Public Opinion and Research in August/September 2018, projected a win for president Mutharika with 27%, while putting Chakwera and Chilima at 25% and 16% respectively. However, almost 22% of the survey respondents were either undecided or refused to answer.

While a total of ten candidates registered to contest the presidential elections, Malawians will choose from a list of eight on Tuesday, after the withdrawal and disqualification of former president Joyce Banda and Ras Chikomeni Chirwa, respectively.

Peter is the younger brother to Bingu wa Mutharika, who served as president of Malawi from 2004 to 2012, when he died of cardiac arrest while in office.

Currently married to Gertrude Maseko, a former member of parliament, Peter has two daughters and a son from his deceased first wife, Christophine. Mutharika’s running mate in this election is Everton Herbert Chulirengji.

Chilima is a Malawian economist who made his grand entry into politics during the 2014 elections, when he was the running mate of president Peter Mutharika.

Before joining politics, Chilima held several high level positions in companies including Unilever, Coca-Cola and Airtel Malawi, where he was chief executive officer.

Chilima fell out with Mutharika, and quit the ruling party, accusing it of allowing rampant corruption to take root in the country. He went on to form his own party called United Transformation Movement (UTM), on whose ticket he will be presidential flagbearer in the forthcoming elections.

Saulos is married to Mary Chilima, and together they have two children. Chilima’s running mate is Dr. Michael Bizwick Usi.

Born on 5 April 1955, Lazarus is the leader of opposition in the country’s national assembly, and president of of Malawi Congress Party (MCP), the biggest opposition party in Malawi, since 2013.

Chakwera contested and lost the 2014 presidential elections, garnering 27.8% of the votes cast against president Mutharika’s 36.4%.

Chakwera was endorsed by Khumbo Kachali of the Freedom Party, and Joyce Banda’s People Party.

Lazarus, who previously served as President of the Malawi Assemblies of God from 1989 to 14 May 2013, is married to Monica Chakwera, and together, they have four children. Chakwera’s running mate is Sidik Mia.

Other candidates in the race are;

Malawi’s presidential election is won by a simple first past the post majority, eliminating the need for a runoff election.

The president and vice president are elected on one ballot to serve a five-year term, the same period that members of parliament serve.

Malawian citizens aged 18 and above are eligible to vote, while foreign nationals who have lived in the country for 7 years can also vote.

Official campaigns start three months before voting day (in this case, March 19, 2019) and ends 24 hours before the opening of polls.

ALSO READ: Malawi receives ballot papers printed in UAE, ahead of May 21 polls