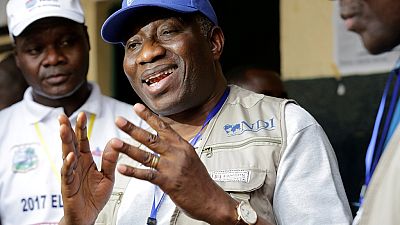 The Nigerian government has accused former President Goodluck Jonathan and his then oil minister of accepting bribes and breaking the country’s laws to broker a $1.3 billion oil deal eight years ago, a London court filing shows.

In papers advancing a London commercial court suit against Shell and Eni, lawyers for the Nigerian government said Jonathan and former oil minister Diezani Alison-Madueke conspired to “receive bribes and make a secret profit”, keeping the government from getting what it was owed from the deal.

Bribes were paid, the receipt of those bribes and the participation in the scheme of said officials was in breach of their fiduciary duties and Nigerian criminal law.

“Bribes were paid,” the filing, reviewed by Reuters, states. It says “the receipt of those bribes and the participation in the scheme of said officials was in breach of their fiduciary duties and Nigerian criminal law.”

A spokesman for Jonathan declined to comment and said the former president was in South Africa as part of an election monitoring team. A London-based lawyer for Madueke did not immediately respond to a request for comment.

Nigerian attorney general Abubakar Malami did not immediately respond to a request for comment.

The 2011 deal is also the subject of a corruption trial in Milan in which two middlemen have been convicted and former and current Shell and Eni officials are also on trial.

An Eni spokesman said the Italian firm was assessing whether UK courts had jurisdiction on a case of “such duplication” to the Milan proceedings and repeated its view on “the correctness and compliance of every aspect of the transaction.”

Shell did not immediately comment, but has repeatedly denied any wrongdoing in relation to OPL 245.

The London lawsuit relates to payments that Shell and Eni made to acquire the licence.

The companies transferred more than $1 billion to the Nigerian government, according to the filing. Milan prosecutors have argued in their case that the bulk of that money was sent on to Malabu Oil and Gas, which was controlled by another former oil minister, Dan Etete.

Eni and Shell retain the rights to develop the field, which has yet to enter production but is one of the biggest untapped oil resources in Africa, with reserves estimated at 9 billion barrels.

In the London court filing, the Nigerian government said it only received a $209 million signature bonus in relation to the deal, and that it estimates the value of the oilfield to have been “at least $3.5 billion”. It said it would seek to calculate damages on that basis.

The Nigerian government has also filed a London case against U.S. bank JPMorgan for its role in transferring over $800 million of government funds to Etete, who has been convicted of money laundering. JPMorgan has denied any wrongdoing.

Despite the international cases, only Nigerian officials can rescind the rights to the block. Oil minister Emmanuel Ibe Kachikwu has said the case should not hinder development of the field. His office did not immediately reply to a further request for comment.

Nigeria’s Economic and Financial Crimes Commission is pursuing a criminal case against other former officials in relation to OPL 245.

President Muhammadu Buhari was re-elected in February, campaigning on the same anti-corruption message that helped him defeat Jonathan in 2015. But opinions within the cabinet differ over how to handle OPL 245.

Some have cited what they view as a lack of evidence, while others point to concerns that taking away the rights could hinder the field’s development in a nation where oil accounts for around 90 percent of foreign exchange earnings.