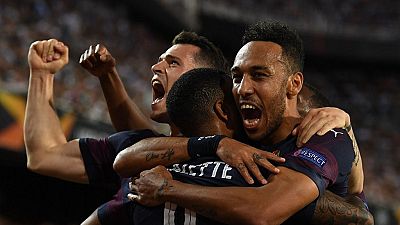 Arsenal beat Spanish side Valencia by four goals to two. Unai Emery’s side had flown to Spain with a 3 – 1 first leg advantage. Overall, Arsenal won 3 – 7 on aggregate.

Hitting the target thrice made him the first Arsenal player to do so in an European semi-final game. The last time an Arsenal player managed to do so was in December 2016 when Lucas Perez achieved a similar feat against Basel.

Pierre-Emerick Aubameyang is the first Arsenal player to score a hat-trick in the semi-final of a European competition.

He makes a little bit of Arsenal history. ? pic.twitter.com/oJAPffWq2O

Arsenal will play London rivals Chelsea who won the second semi-final against German side Eintracht Frankfurt. Chelsea advanced on penalties after the game had entered extra time after they played out a one – all draw to end the tie two – all on aggregate.

The Europa League finals will be played in Baku Azerbaijan on May 29. Arsenal will particularly be looking to win the competition which will grant them automatic entry into next year’s Champions League.

They are very likely going to miss out on the fourth and final automatic slot for the UCL with a game to end the domestic league season.

4 – This is the first time that all four places in the Champions League/European Cup and Europa League/UEFA Cup finals will be filled by one country. Domination. pic.twitter.com/GrXFPvAemA