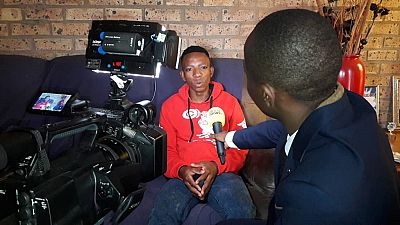 Keorapetse Mashaba, an 18-year-old South Africa casts his ballot for the first time alongside more than 26 million registered voters in the 2019 general elections.

According to his father, Solomon Mashaba, Keorapetse had shown little interest in voting during the early stages of the registration process but was finally persuaded to get registered.

I was thinking about him, my son when I was voting, and I think he is going to make the right choice, his mother, Doreen Mashaba said.

As young South Africans, Keorapetse and his friend Tebogo Maela who also voted for the first time have issues they want addressed.

Tebogo Maela specifically hammered on the issues of drugs and the high crime rate which has plagued the country, calling for the need for a change.

According to reports, over 6 million youths below the age of 30 registered to vote. However, the electoral commission and political parties are hoping for a high voter turnout, to enhance the credibility of the outcome of the polls.

The May 8 election comes 25 years since the ANC took over the leadership of the country under Nelson Mandela, ending several years of apartheid rule, and giving an opportunity for more generations of South Africans to participate in the electoral process.

The elections is very crucial and comes at a time when the country has been beleaguered by corruption scandals.