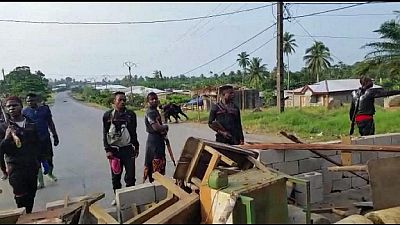 The human rights organization Human Rights Watch (HRW) denounced in a report published on Monday “a regular use of torture and illegal detention” by the Cameroonian authorities against English-speaking separatists.

HRW claims to have “documented 26 cases of illegal detention and enforced disappearance at the detention centre of the Secretariat of State for Defence between January 2018 and January 2019, including 14 cases of torture”.

The 26 cases concern English-speaking separatists or persons suspected of being so, HRW added.

Gendarmes and other security forces at the State Secretariat of Defense (SED) used severe beatings and near-drownings to obtain confessions.

Among them, “ten were leaders of the self-proclaimed Ambazonia interim government,” the NGO detailed.

The English-speaking separatists of Cameroon, a country with a French-speaking majority, are campaigning for the creation of an independent state in the North-West and South-West regions on behalf of Ambazonia.

At the end of 2017, after a year of protest, separatists took up arms against Yaoundé. Since then, these regions have been the scene of an armed conflict that has continued to grow.

“Gendarmes and other security forces at the State Secretariat of Defense (SED) used severe beatings and near-drownings to obtain confessions,” the NGO said in its publication. In this report, HRW also cites cases of torture inflicted by separatists on civilians.

On Wednesday, the Ministry of Defense denounced on Facebook the “guilty silence and complicity of Human Rights Watch, Amnesty International and the international media” in the face of abuses committed by separatists against civilians.

In mid-April, a HRW researcher working on the conflict in the English-speaking area was denied entry to Cameroon at Douala airport.
In twenty months, the conflict in the English-speaking area has killed 1,850 people, according to the International Crisis Group, a centre for geopolitical analysis. It has already forced more than 530,000 people to flee their homes, according to the UN.

At the initiative of the United States, the UN Security Council will hold its first meeting on the crisis in English-speaking Cameroon on May 13, which will focus on the humanitarian situation.

“The UN Security Council should send a clear message that ending torture in detention is crucial to responding to the crisis in English-speaking regions,” HRW commented in its report on Monday.

On Thursday, Michelle Bachelet, the UN High Commissioner for Human Rights, arrived in Cameroon for a four-day visit, where she met with President Paul Biya on Friday.