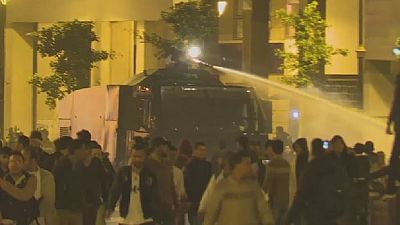 Thousands of contract teachers camped out infront of parliament in the centre of Rabat over their employment terms.

“ We condemn this brutal intervention towards teachers who wanted to organize a peaceful demonstration outside the parliament. We were confronted by a brutal intervention by the police. You see in your camera how the security forces repress us “, a contract teacher, Mustapha Bouché said.

We condemn this brutal intervention towards teachers who wanted to organize a peaceful demonstration outside the parliament.

The public sector teachers who wore mostly white coats, came from several cities across the country.

Reports say a meeting with the education ministry to resolve the issue on Tuesday was cancelled.

The temporary teachers launched a strike last month to press their demands for permanent employments that would improve their rights and other benefits, including retirement.

Over 55,000 teachers were recruited on fixed-term contracts since 2016.

The teachers enjoy the same salaries of 5,000 dirhams or $ 520 per month as their permanent colleagues.

But these temporary teachers have no access to a pension fund and other benefits.