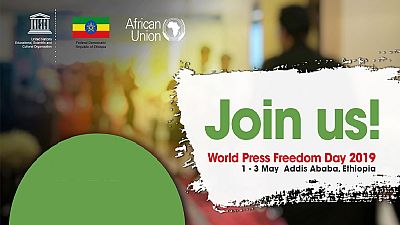 The 2019 edition of the United Nation’s World Press Freedom Day will take place in the Ethiopian capital, Addis Ababa. A move that is allied to reform efforts by Prime Minister Abiy Ahmed’s administration.

The main celebration of the UNESCO-led day will take place in Ethiopia between 1st to 3rd of May. Many media rights watchers have said the decision was both a surprise but welcome.

Until April 2018, Ethiopia was one of the biggest jailers of journalists. Months after Abiy, according to the press rights group, Reporters without Borders; there was no journalist who was being held in jail with relation to their work.

Abiy released all political dissidents, activists and journalists who had been widely detained under vague legislation. Abiy is spearheading a gradual move to dismantling such laws.

With about two weeks to the D-day, the national carrier – Ethiopian Airlines – announced that it had been selected as the official carrier for the World Press Freedom Day 2019 conference.

Ethiopian Airlines is very much delighted to be selected as official carrier for #2019WorldPressFreedomDay Conference. #ethiopianairlines pic.twitter.com/rQUnONsUWC

About the 2019 World Press Freedom Day

Jointly organized by UNESCO, the Government of the Federal Democratic Republic of Ethiopia and the African Union Commission the main event will be held at the Headquarters of the African Union.

This year’s theme “Media for Democracy: Journalism and Elections in Times of Disinformation” discusses current challenges faced by media in elections, along with the media’s potential in supporting peace and reconciliation processes.

The Day will also examine concerns such as the safety of journalists and how we can better push back against a growing climate of disinformation.