African leaders call for an immediate ceasefire in Libya 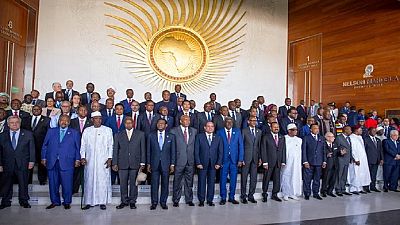 Call for ceasefire in Libya

African leaders meeting in Cairo on Tuesday called for an “immediate and unconditional halt” to fighting in Libya.

Egypt’s president, Abdel Fattah al-Sisi who hosted the meeting, said leaders should develop a coherent regional response to the crisis in Libya, warning against ‘a slide into chaos’.

The AU’s Libya “troika”, which includes Sisi and his Rwandan and South African counterparts, urged “all parties to act with restraint” and to facilitate “the delivery of humanitarian aid”.

Before the launch of the Tripoli assault, AU commission chair Moussa Faki had said the organisation would host a “reconciliation” conference in July aimed at uniting Libya’s political rivals.

A similar effort by the UN was postponed following the launch of Haftar’s offensive.

Appeal for democratic reforms in Sudan

They also agreed on “the need for more time” for a transition, urging the African Union to extend its end of April deadline for the ruling military council to hand power to civilians or face suspension from the bloc.

The AU suspended both Egypt and the Central African Republic in 2013 following coups in both countries. Both have since had their membership restored.

An extension would ease international pressure on the council, which took power after the army’s toppling of longtime president Omar al-Bashir, to yield power.

Bashir left office on April 11, but protesters have continued to hold mass rallies and world powers have backed their calls for a swift transition to a non-military government, demands the council has so far resisted.

Addressing the Sudan meeting, Sisi called for “African solutions to African problems” and urged the country’s political actors to “safeguard the state’s institutions… in order to prevent a slide into chaos”.

Last month, he warned against the dangers created by protests, without explicitly naming Sudan or Algeria, where demonstrations have toppled another long-time leader, president Abdelaziz Bouteflika.

African leaders are meeting in Egypt on Tuesday where they will address developments in Sudan and Libya, in the first emergency summits since the two nations were rocked by popular protests and an invasion on the capital respectively.

In Sudan, protests that started in December last year continue even after the military toppled president Omar al-Bashir.

In Libya, commander Khalifa Haftar is leading an offensive on Tripoli, with an aim of overthrowing the United Nations backed government.

The planned summits are the first to be convened by African leaders on the current crises in Sudan and Libya.

For Sudan, the objective “is to discuss … the most appropriate ways to address the evolution of the situation and to contribute to stability and peace”, Egypt’s presidency said.

The AU on April 15 threatened to suspend Sudan if the military does not hand over power within 15 days of that date to a civilian authority.

President of the African Union commission Moussa Faki is also expected to participate in the discussions, along with officials from Ethiopia, South Sudan, Uganda, Kenya and Nigeria.

Seeking a political solution in Libya

Another summit on Libya, which will bring together the leaders of Rwanda, South Africa and the Congo with Sisi, will focus on “relaunching a political process… (and) the elimination of terrorism”, Egypt’s presidency said.

Strongman Haftar’s self-styled Libyan National Army launched an offensive against Tripoli, the seat of the internationally recognised Government of National Accord, on April 4.

Egypt is a strong ally of Haftar, who is also backed by the UAE and — according to the White House — was consulted by US President Donald Trump in a phone call last week.