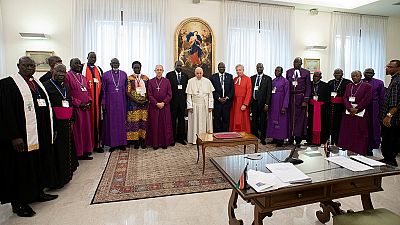 South Sudan’s political leaders including the leaders of the two main warring factions, president Salva Kiir and rebel leader Riek Machar on Thursday concluded a two-day retreat in the Vatican, that sought to heal bitter divisions that have fuelled conflict since 2013.

The world’s youngest nation is due to set up a unity government next month, after the September 2018 peace deal that was negotiated in the Sudanese capital of Khartoum.

Sudan, which is predominantly Muslim, and South Sudan, predominately Christian, fought each other for decades before the south became independent in 2011.

I am asking you with my heart, let us go forward. Resolve your problems.

Brutal fighting broke out, characterised by extreme sexual violence, the use of child soldiers and attacks on civilians along ethnic faultlines. About 400,000 people died and more than a third of the country’s 12 million people were uprooted, sparking Africa’s worst refugee crisis since the 1994 Rwandan genocide.

Three weeks after the leader of the Catholic church met with president Kiir in the Vatican, Pope Francis organised a retreat for South Sudan’s key political leaders.

The retreat, which a Vatican statement called “both ecumenical and diplomatic”, included 24 hours of praying and preaching in the Pope’s Vatican guest house. The leaders lived and ate together during the retreat. Kiir and three of his deputies who attended the retreat are all Christians.

The pope on Thursday stunned the leaders and the world, when a video emerged of him kneeling down to kiss the shoes of the two main opposing leaders and several other people in the room.

Incredible video of Pope Francis on his knees kissing the feet of the leaders of South Sudan, who have completed a 2 day spiritual retreat at the Vatican, where the Pope has called for peace and reconciliation in the country, and that he wishes to visit South Sudan pic.twitter.com/BEBXj2kLPy

He appealed to President Salva Kiir, his former deputy turned rebel leader Riek Machar, and three other vice presidents to respect an armistice they signed and commit to forming a unity government next month.

“I am asking you as a brother to stay in peace. I am asking you with my heart, let us go forward. There will be many problems but they will not overcome us. Resolve your problems,” Francis said in improvised remarks.

The retreat was also attended by the Archbishop of Canterbury, Justin Welby, the spiritual leader of the worldwide Anglican communion; members of the South Sudan Council of Churches; and other African Catholic and Presbyterian Church leaders.

“I would like to assure everyone that Sudan will work hard and try all measures based on our experience during the war and peace times to ensure that this initiative is a success.

“We shall use our experience in the management of national and community dialogues to address all the issues,” President Bashir said.

South Sudan’s government has asked for $285 million in funding to implement the deal, even as international organisations warn of a possible collapse before May 12, when the leaders are due to start sharing power.

2018: Ethiopia’s Abiy presides over face-to-face meeting between Kiir and Machar

2015: the IGAD-negotiated peace deal that was signed with reservations

In 2013, the new nation was plunged into chaos, when Kiir fired his vice-president, Machar, accusing him of plotting a coup. Machar denied the allegations, and the ensuing political struggle between the two protagonists was often fought along ethnic lines.

Kiir is an ethnic Dinka, the country’s largest group, while Machar is from the second largest community, the Nuer.

On July 9, 2011, Kiir was sworn in as the first president of South Sudan, in the presence of Sudan’s president Omar al Bashir, an event that signified the formal declaration of independence from Sudan.

In January of the same year, millions of jubilant southern Sudanese had voted to split from the north in their secession referendum. The referendum had been part of a 2005 peace agreement that ended more than two decades of civil war fought between African rebels in the south of Sudan, and the government in Khartoum in the mostly Muslim, Arabic-speaking north.