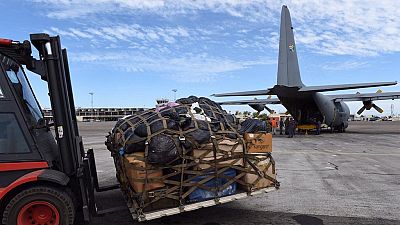 South African security forces and health services on Tuesday sent material relief to its neighbours hit by the devastating cyclone that ravaged parts of southern Africa in March 2019.

The donations were specifically to Mozambique and Malawi with the relief mission consisting of the army, police and department of health flying to both countries with what was food and material relief.

It is the second tranche of relief after international affairs minister in late March sent a financial donation from the government and peoples of South Africa. Reports indicate that 76 million rands was handed over to Mozambique and Zimbabwe respectively.

Cyclone Idai and its effects adversely hit three countries in the region – Mozambique, Zimbabwe and Malawi. It left a trail of deaths and destruction with the aftermath being a huge cholera outbreak in Mozambique as it continues to count losses from the incident.

South Africa had showed regional leadership in the wake of the landfall when early on President Cyril Ramaphosa instructed the South Africa National Defense Forces, SANDF, to move in to help.

The army and health experts from South Africa were amongst the first relief teams that arrived in the worst-hit Mozambican city of Beira, helping with key rescue efforts and delivery of aid.

Donations dropped off at Beira, Mozambique – SAn relief mission, consisting of elements from the #SANDF, SAPoliceService & HealthZA working with the Malawi, Mozambique & Zimbabwe counterparts to assist in rescue and relief operations. #CycloneIdaiHumanitarian2019 pic.twitter.com/IhjMdHqXB1