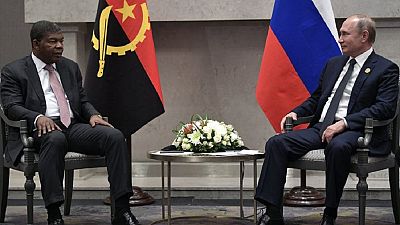 The leaders of Russia, Angola agreed to deepen relations and coordinate efforts on international platforms.

Vladimir Putin and Joao Lourenco signed six documents regarding the cooperation in diamond mining, gas and oil production, space and agriculture after a three-day visit by the Angolan president.

Prior to the meeting, Lourenco said Angola is one of the principal buyers of Russian arms and his country wants to “not only buy but also produce them.”

Angolan armed forces are used to work with Russian weapons" and because of that the military cooperation between the two countries "will last forever.

He said the country is interested in buying Russian S-400 air-defense systems, but there is no talks because of economic difficulties.

“Angolan armed forces are used to work with Russian weapons” and because of that the military cooperation between the two countries “will last forever,”, Sequeira added.

Lourenço met with Vyacheslav Volodin, Russia’s speaker for parliament, and with representatives of Alrosa, a Russian diamond mining giant with operations in Angola, as well as neighboring Botswana and Zimbabwe.

Alrosa holds a 32.8 percent share in the Catoca mines in Angola’s Lunda Sul province, and is a founder of Angola’s Luemba mining company.

The Angolan president’s visit took him to the world’s famous Bolshoi Theatre as well as tours to historic buildings in Moscow during his stay.