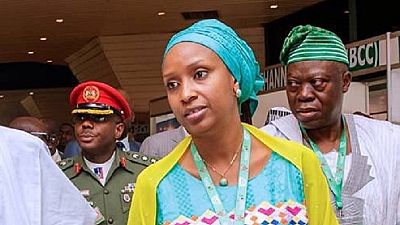 Hadiza Bala Usman, head of the Nigerian Ports Authority, NPA, has reiterated the hurdles that women in the predominantly Muslim north of the country face.

The 43-year-old hails from the north central Kaduna State where she previously served as Chief of Staff to the current governor Nasir El Rufai.

Speaking at a CNN organized event on Wednesday, the NPA Managing Director said her strong will was partly the reason for her rise in public service despite the odds.

“Where I come from in the North, women are conditioned to think that they’re not meant to be out there. But I’m a feisty woman who will take what’s mine. I serve as an inspiration to young women out there,” she told the panel.

She also charged women who make it to the top to look back and mentor younger ones in order to change what she says are regressive policies.

Hadiza Bala Usman says women who have made it to the top should mentor younger women and change regressive policies to the benefit of all women #CNNxBHCAfricanWoman pic.twitter.com/4QETencQuy

The program held under the auspices of the British High Commission in Nigeria also brought together other women who shared their perspectives on what it meant to be a woman in Africa today.

She was also a key member of the Bring Back Our Girls activist group that continues pushing for the return of girls kidnapped by Boko Haram in 2014.

Nigeria’s politics is generally dominated by men, more so for the conservative north. Incidentally the first female deputy governor was also picked by the Kaduna State governor El Rufai who won a final term in recently held polls.

I was the first female Chief of Staff in Kaduna State. Where I come from in the North, women are conditioned to think that they are not meant to be out there. I’m a strong woman & will keep being an inspiration to young women in #Nigeria – hadizabalausman #CNNxBHCAfricanWoman pic.twitter.com/DGasktlNdk