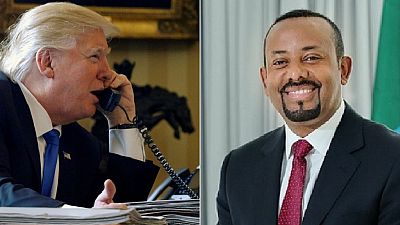 Ethiopian Prime Minister received a call from president of the united States, Donald Trump, on Friday; his office confirmed.

The exchange between the two centered on events arising from the deadly plane crash of March 10. Trump spoke about the strength of the Ethiopian national carrier and stressed his support for ongoing reforms.

The two leaders also committed to deepening relations between the two countries, the PM’s office added.

Abiy is the latest African leader to have received a call from the U.S. leader. Others in the same bracket are Kenya’s Uhuru Kenyatta, Nigeria’s Muhammadu Buhari and then president of South Africa, Jacob Zuma.

PM Abiy Ahmed and Donald Trump in a phone call today shared their condolences to the people of both countries for the loss of lives in the fatal Flight 302.

Donald Trump also expressed support for the holistic reforms that have been taking place in Ethiopia over the past months. The two leaders concluded their call with a commitment to strengthen the two country’s long standing diplomatic relationship.

The highest U.S. official Abiy has met is the vice president Mike Pence last year. Abiy on a tour of the U.S. met with Pence at the White House.

At the time, Pence also assured of continued support of Washington for reforms that the PM was undertaking back home.

Washington is seen as a key ally of Ethiopia in different aspects of bilateral cooperation, key among which is security cooperation in the fight against terrorism.

The last top U.S. official to have visited was then Secretary of State Rex Tillerson who visited Addis at a time when tensions were high. He was fired by Trump by the time he completed his planned visit which took him to Kenya and Nigeria.