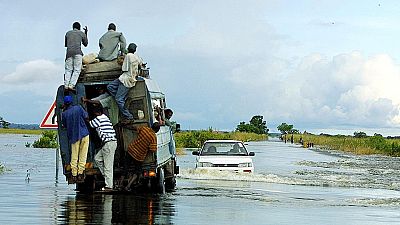 The number of people killed in floods in southern Malawi has risen to 56, an official said on Wednesday, with the country now also on alert for an approaching tropical cyclone.

Almost 83,000 people have been displaced since storms that began more than a week ago caused rivers to break their banks, leaving villages underwater, and knocked out power and water supplies in some areas.

Chipiliro Khamula, spokesman for Malawi’s Department of Disaster Management, said 56 deaths had been recorded as of Tuesday, as well as 577 injuries.

“Most of the displaced families are living in camps,” Khamula said. “So far, a total of 187 camps have been established in the affected districts.”

Now Malawi has been put on alert for more rain and flooding on Thursday when Tropical Cyclone Idai is expected to make landfall through Beira, in neighbouring Mozambique, the Department of Climate Change and Meteorological Services said.

The cyclone will dump heavy rains and winds over Mozambique, before moving to southern Malawi and later Zimbabwe, the department’s director, Jolam Nkhokwe, said.

Regions of Mozambique have also already been affected by flooding.

Malawi’s President Arthur Peter Mutharika, who declared a state of disaster in southern Malawi late on Friday, cancelled trips to the northern region of Malawi to attend to the flooding.