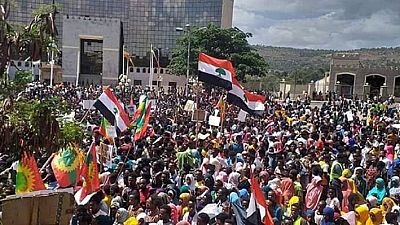 Thousands of people have turned out again in Ethiopia’s Oromia region in protest against housing unit allocations tied to land rights of the Oromo people – the most populous ethnic group.

BBC Africa reported that the protests are continuing in parts of the vast region. The Addis Ababa city administration has yet to comment on the issue.

The federal government has also yet to also comment. Conspicuously, the state-affiliated outlets – FBC and EBC have yet to report on the incident.

The Oromia regional government in Ethiopia has slammed the Addis Ababa city administration over its handling of allocation of condominium houses.

The government issued a statement on Thursday shortly after multiple protests were held across the region after low-cost buildings were distributed by the deputy mayor of the city, Takele Uma Banti.

Oromia rejected as unnecessary what it said was the handing over of condominium units found within a special zone of the region whiles disputes still remain over the exact boundaries of Addis Ababa.

The city administration earlier this week allocated about twelve thousand of the estimated 51,000 flats built by government. The move was mainly to solve acute shortage of housing.

The deputy mayor was voted into office in July 2018 to serve s 31st holder of the post. He had previously worked with the Oromia Transport Bureau.

Addis Ababa which serves as the national capital is located in the Oromia region but is one of two chartered cities in the country. The other one is Dire Dawa.

Oromos have long claimed the capital which is referred to in local parlance as Finfeenne. Oromia – the country’s largest and most populated region – completely surrounds the capital Addis Ababa.

The region was at the heart of protests that kicked against a plan to expand the boundaries of the capital in 2015. The protests morphed into anti-government rallies that led to political change.

The expansion plan was dropped in 2015 but the protests forced then Prime Minister Hailemariam Desalegn to resign in early 2018 ushering in the era of PM Abiy Ahmed.

Abiy, the first Oromo in recent years to become Prime Minister is also head of the party that currently governs the region, Oromo Democratic Party, ODP. The regional president is however the ODP vice-president, Lemma Megerssa.