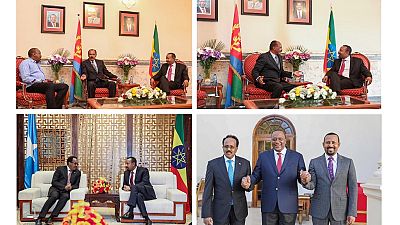 In a space of three days Ethiopia’s Prime Minister Abiy Ahmed met majority of his compatriots in the Horn of Africa region for bilateral discussions and others centered on regional unity.

The Horn is a peninsula of northeastern Africa (the easternmost part of Africa) comprising Somalia and Djibouti and Eritrea and Ethiopia. Abiy has in under a week met all leaders except for Djibouti president.

It started on Sunday (March 3) when Abiy and Kenyan counterpart Uhuru Kenyatta arrived – on separate flights – in the Eritrean capital, Asmara. Abiy had earlier hosted Kenyatta who was on a two day official visit to Ethiopia.

Whiles in Ethiopia, the two along with their host Isaias Afwerki met for a tripartite summit whiles bilateral talks between Eritrea and the two respective countries were also held. Abiy’s first meeting with a leader in the Horn was in Eritrea.

On Monday, Abiy and Afwerki flew together to South Sudan where they were received by President Salva Kiir. The three leaders held discussions bordering on regional security and integration.

Then on Tuesday, the Somali leader Mohammed Abdullahi Farmaajo arrived in Addis Ababa for bilateral talks. The discussions focused on four key issues including:

Abiy along with Farmaajo flew to Nairobi in Kenya where a mediation effort saw Kenya and Somalia ease diplomatic tensions that arose recently over a maritime boundary dispute.

The two neighbours have confirmed that they will restore ties as they await the outcome of an international arbitration over the issue.

In less than a week Abiy has been to Eritrea, hosted the Somali leader and helped mediate to some extent a dispute involving Somalia. Enough diplomatic work aiming at regional integration and cooperation.

All this comes on the back of the historic July 2018 peace deal with Eritrea along with Ethiopia – Somali mediation of Eritrea – Djibouti impasse and in the middle of all this is one man – Abiy Ahmed.

Enough grounds for a Nobel Peace Prize in the near future? Well, an Ethiopian lawyer thinks Abiy has earned a nomination and in fact deserves the award. It’s but a matter of time – who knows?

I hope the NobelPrize committee, which reportedly received Abiy's nominations for the award early last month, is watching these developments. Abiy is a worthy candidate that accomplished so much already in this highly volatile region: Eritrea, South Sudan, & now Kenya-Somalia. https://t.co/0mHAmtmw86