Ghanaian-British model gets own Barbie doll 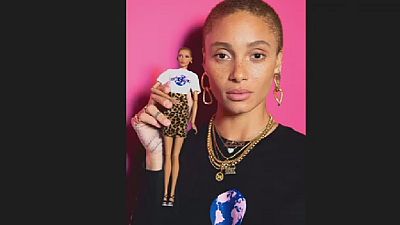 British model and activist Adwoa Aboah got her own Barbie doll on Wednesday March 6, ahead of International Women’s Day on Friday March 8.

Founder of the “really happy” Gurls Talk was introduced to her unique Role Model Barbie at Mattel in Los Angeles in the United States.

The doll is dressed in a replica of a Michael Halpern dress, a Stephen Jones Millinery for Halpern turban and Christian Louboutin shoes.

It's wonderful to know that although they have never met me, they have taken such great pleasure in making sure that it is a perfect.

“It’s just so nice them not knowing me and them taking into account all the things that make me, me, in terms of my tattoos, my earrings, the shape of my head and the freckles and the skin complexion and it’s wonderful to know that although they have never met me, they have taken such great pleasure in making sure that it is a perfect, kind of representation of who I am”, she remarked.

Aboah wore the outfit on accepting the British Fashion Council Model of the Year 2017 Award, in honour of her global impact in modelling and activism.

The Adwoa Aboah doll also has another outfit, a casual look of a Gurls Talk T-shirt and leopard print skirt.

Gurls Talk is “an online community for young women to discuss issues such as mental health”, according to the official website.

Mattel’s press release says girl empowerment is “at the core of everything the Barbie brand does”, inspiring youngsters since 1959.

Adwoa was born in London in 1992. Her father was born and raised in Ghana before emigrating to England.

Currently, she’s on the list of the top 50 female models by models.com.