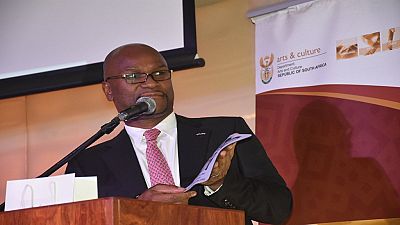 South Africans are calling for justice for musician and entertainer, Babes Wodumo, who over the weekend posted a video while she was being assaulted by her partner, another musician Mandla ‘Mampintsha’ Maphumulo.

South Africa’s main political parties including the African National Congress (ANC), Economic Freedom Fighters (EFF) and the Democratic Alliance (DA) have all joined the calls for Mampintsha’s arrest, saying it will go a long way in tackling the chronic issue of domestic violence in the country.

Babes Wodumo, whose real name is Sakhile Mhlonishwa Langa, has since opened a case of assault against her partner, and is scheduled to address the media on Tuesday morning.

#DA leader MmusiMaimane calls for criminal charges to be a laid against #Mampintsha #sabcnews pic.twitter.com/fgVXzbFelc

“We hope that the South African Police Service and the criminal justice system will take strong action against Mampintsha,’‘ said the DA’s Solly Malatsi.

The EFF on the other hand has laid a a criminal complaint of assault against Mamphintsha.

“We must protect women and expose abuse whenever it takes place irrespective of who the perpetrator or victim is,’‘ said Vusi Khoza, chairperson of the EFF in KwaZulu-Natal.

The ANC in Gauteng also released a statement, calling for action to be taken against Mamphintsha.

“Things get worse over time and in the worst-case scenario, you end up with dead partners and we wouldn’t want this situation for Babes or anyone in her situation.”

While the original video posted by Babes Wodumo has since been deleted, users who had downloaded it have reposted it on social media.

Greetings
We would like to thank everyone for the messages support about the early morning video. unfortunately Babes can’t be able to have any interviews for now as she is still emotional about the situation. She will issue the statement on her social media platform later today

Babes’ father says that Mampintsha has BEEN taking Babes’ gig money. Even all the money she made from Black Panther. Millions even. Mampinthsa is a physical, emotional and financial abuser. A greedy, sick, vile man. #BabesWodumo #LockUpMampintsha pic.twitter.com/7BptrWX2ge

We are silent when it happens to ordinary citizens but when it occurs among celebrities we are in uproar. We should be equally outraged at violence against women no matter who the victim is #Mampinthsa #LockUpMampintsha