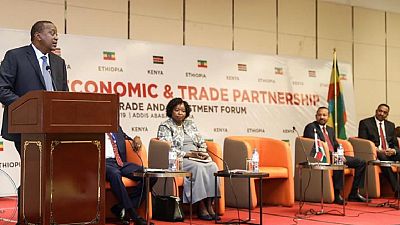 Leaders of Kenya and Ethiopia met in Addis Ababa for talks aimed at deepening relations between the two East Africa giants.

The Ethiopia Prime Minister Abiy Ahmed’s office said the Kenyan leader arrived with a delegation of businesses and investors to explore investment opportunities.

Both leaders were present at the two-day Kenya-Ethiopia High Level Trade and Investment Forum. In his remarks PM Abiy highlighted the opening up of the country & the economic reforms underway as a catalyst for strengthening Ethio-Kenya trade relations.

I joined Prime Minister Abiy Ahmed Ali of Ethiopia for the official opening of a two-day Kenya-Ethiopia high level trade forum in Addis Ababa, Ethiopia. We made a commitment to deepen trade and economic ties between our two countries | PMEthiopia pic.twitter.com/MLD2LnABgo

After the summit the leaders flew to the city of Hawassa where they visited one of the countries industrial parks in the company of Ethiopia’s Investment Commission chief.

The Hawassa Industry Park is a facility where 22 leading manufacturers in textile and apparel are currently operating employing 25,000 employees.