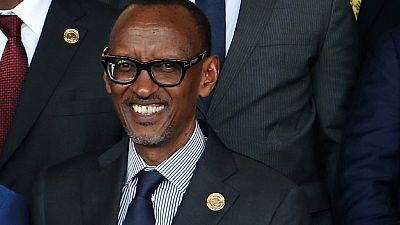 The African Union, AU, presidency is a year-long rotational post by serving African presidents. It is currently held by Egypt’s Abdel Fattah Al-Sisi – the first North African leader to hold the post in a while.

The immediate past President was Rwanda’s Paul Kagame whose reign could be marked by two main planks of continent-wide trade and institutional reforms.

But before Kagame, there was Chad’s Idris Deby Itno in 2016 – his reign ushered in the launch of the African passport for Heads of State and other top AU officials.

Next was Guinea’s Alpha Conde for the year 2017, his reign was caught in the middle of the Zimbabwe coup that ousted long-serving Robert Mugabe.

Kagame took over from Conde in January 2018 at the 31st Ordinary Summit of Heads of States and Government in Addis Ababa. His main promise was to champion the cause of continental integration – travel and trade.

“President Alpha Condé is a professor, a teacher, and I can safely say that i have learned from him. I have also seen his very big heart for Africa. Please join me paying tribute to his impeccable service to the continent,” Kagame remarked about his predecessor.

Months after he took charge, Kagame called African leaders to a meeting in the Rwandan capital Kigali. in March At the meeting, forty-four countries signed up to the Africa Continental Free Trade Area, AfCFTA.

The trading bloc that seeks to merge African markets was effectively pushing towards the world’s biggest single market since the World Trade Organization, WTO.

A number of countries ratified and deposited same with the AU Chairperson over the year. A flurry of belated ratifications meant that the AU was inching close to the minimum 22 it needed for the deal to come into force.

Long before his presidency, the AU had tasked Kagame with leading an institutional reform of the body.

Perhaps taking advantage of his presidency, he called an extraordinary meeting of heads of state in late 2018 at which most of the proposed reforms were passed in a bid to increase the effectiveness and self-sufficiency of the continental bloc.

Here are some of the key points reached after the summit:

This is a routine duty carried out by the Chairperson each year. He or she is expected to represent the continent at a number of high profile inter-continental or cross continental meetings.

Kagame in his capacity as AU President met with Donald Trump in January 2018 in Davos Switzerland during the World Economic Forum, WEF.

He was also present at the G20 summit, the 2018 edition was hosted by Argentina. Kagame was joined by South Africa president Cyril Ramaphosa whose country is the only African nation in the bloc.

The Germany Compact for Africa meeting in Berlin was another gathering Kagame attended in his AU capacity plus the Africa-Europe High Level Forum on digital cooperation held in Austria in August 2018.

The DRC quagmire and near embarrassment

The AU as it always does deployed an election observer mission led for former Malian president to the Democratic Republic of Congo, DRC, for long delayed polls.

The AU envoy was at the forefront of calls for candidates to maintain calm and preserve peace before, during and after the polls. The process before and during the vote was relatively calm till after the vote.

Internet was cut, results were delayed with talk of possible manipulation being cited. Eventually when the results were released, the AU like major observers expressed misgivings about the outcome.

A special AU meeting was convened along with the southern Africa bloc, SADC, in Addis Ababa. Kinshasa dismissed an AU call to delay ruling of a poll petition pending the visit of an AU envoy over the contested result.

The body eventually cancelled the Kinshasa mission after the top court validated the election of Felix Tshisekedi. The AU all but boycotted the historic handing over of power from Kabila to Tshisekedi – the first such in DRC history.

The AU explicitly gave its fill blessing to the candidature of former Rwandan Foreign Minister, Louise Mushikiwabo when she entered the race to become http://www.africanews.com/2018/10/12/rwanda-s-louise-mushikiwabo-is-new-secretary-general-of-la-francophonie/ Secretary-General of the International Organization of La Francophonie, IOF.

Mushikiwabo was a favourite after the incumbent withdrew from the race. She eventually was elected in a vote that took place in Austria last year.

Rwanda, despite being a German colony, has multiple working languages, English, French and Kiswahili being part. Aside the IOF, Rwanda is also a member of the Commonwealth group of nations.

For a president with full responsibilities back home, Kagame clearly embodied a busy year serving the continent reaping tangible results over a 12-month period. But it also boils down to the AU Commission and its hard working staff.