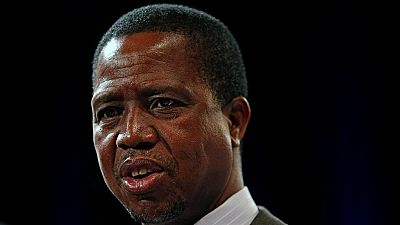 Opposition parties in Zambia are accusing president Edgar Lungu of presiding over political violence against his rivals, and intend to report him to the International Criminal Court.

Ten opposition figures told journalists in Lusaka on Wednesday that Lungu was to blame for an increase in violent crackdowns on opponents, including main opposition leader Hakainde Hichilema.

They showed an undated video of Hichilema fleeing police firing teargas. The footage also purported to show shell casings left over from the firing of live rounds.

We have trust and confidence of the ICC and if they are not guilty they will be acquitted.

Hichilema last week claimed he had survived an assassination attempt while campaigning in Sesheke in Western Zambia ahead of a recent by-election.

Lungu and Hichilema have a long and acrimonious history.

In 2017 Hichilema was arrested and charged with treason after his motorcade apparently failed to stop for the president’s own road convoy.

“We cannot sit idle as our citizens are maimed by ruling Patriotic Front (PF) cadres and so we have taken the decision to report certain individuals to The Hague for facilitating a wave of political violence,” said Charles Milupi, the leader of a smaller opposition party.

In addition to Lungu, the coalition would also report the home affairs minister, Lungu’s presidential advisor, his press secretary Amos Chanda, and the PF secretary general.

“We have trust and confidence of the ICC and if they are not guilty they will be acquitted,” added Milupi.

He claimed the footage showed police wanting to assassinate Hichilema so that he cannot contest elections in 2021.

Lungu’s spokesman told AFP that accusations levelled against him and president were “rubbish”.

“My lawyers will be filing civil …(and) criminal proceedings. In fact I was never in Sesheke and I have never been there in my life,” Chanda said.

The ICC, based in The Netherlands, investigates and tries the gravest international crimes — genocide, war crimes, crimes against humanity, and state aggression.

It can be requested to carry out an investigation by a state that has signed up to the court’s founding Rome Statute, or by the UN Security Council. The ICC prosecution can also open a probe if it receives reliable information about crimes committed in a member state, which Zambia is.