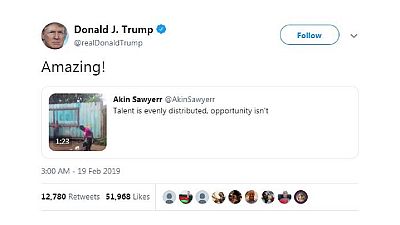 “Amazing,” one word the United States president Donald Trump used to react to an African woman in a viral football skill video.

The video of the woman – somewhere in Africa – had been making the rounds on social media platform Twitter since the weekend.

The woman is seen juggling a ball with effective and efficient dexterity that is usually seen of professional footballers during signing on ceremonies or at training grounds.

Persons surrounding her kept hailing her as she went about displaying her skills for well over a minute. She ended the act to much applause by the onlookers.

President Trump’s reaction, however, came on Monday. As is usual of his tweets, it has been ‘liked’ and retweeted massively.

Reactions to Trump’s comment have been diverse, from those worried about the things that occupy his mind in the midst of a potential government shutdown. Others hold that Trump had spoken the truth about how spectacular the skills display was.

The about 90-seconds video which Trump commented on was shared by one Akin Sawyerr, an entrepreneur and a person in the financial technology and block chain arena. He first shared the tweet on February 16. It has been watched close to 8 million times in three days.

If there is a president known to be in charge of his Twitter handle, it is Donal Trump. He has often made major announcements using the platform. Whiles most leaders will sign off their tweets, Donald Trump is not known to do so.