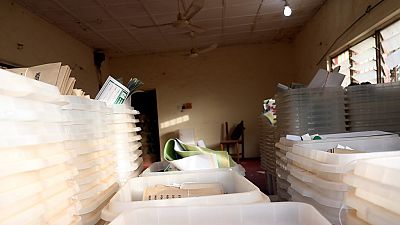 Nigerian authorities postponed Saturday’s national election by a week, just hours before polls had been due to open, prompting the opposition candidate to accuse President Muhammadu Buhari of seeking to “disenfranchise” voters.

The electoral commission said the postponement was due solely to logistical factors and denied political pressure had played any part in the decision. Buhari and his rival, former vice president Atiku Abubakar, both urged voters to stay calm.

Mahmood Yakubu, chairman of the Independent Electoral Commission, said the election would now be held on Feb. 23, adding that the date was “sacrosanct” and that campaigning would be suspended until then.

Buhari, in power since 2015, faces a tight election contest against Atiku of the People’s Democratic Party (PDP). Nigeria is Africa’s largest economy and its top oil producer.

Nigerians expressed dismay and anger over the delay, in a country where 84 million people have registered to vote. Past elections have been marred by violence, intimidation and ballot-rigging, and the postponement raised the possibility of unrest.

“They (the government) are not following the rule of law… This is a total ploy, it is not true that they are not ready” said opposition supporter Oscar Humphrey, 37, in the northern city of Kano, a key battlefield in the presidential race.

In President Buhari’s hometown of Daura in northern Nigeria, student Dauru Balarabi also expressed dismay, saying he had gone there specially to vote. “I spent my morning, my time, my energy for the elections so actually I am not happy,” he said.

The electoral commission’s Yakubu attributed the decision to delays in transporting electoral materials.