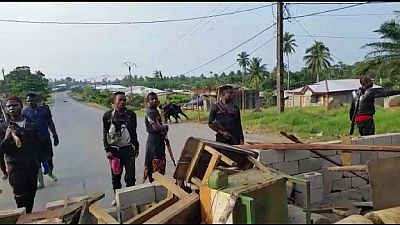 An attack on a district hospital in South West Cameroon left four people dead with reports indicating that there were burnt alive after being trapped during the inferno.

Kumba district hospital was attacked by suspected separatist elements with several units of the facility affected by the inferno.

The hospital was serving a large pool of patients given that most smaller health outfits had been closed due to threats by separatists. Social life has been largely disrupted in the two western regions affected by what has become known as the Anglophone crisis.

Even though no group has at yet claimed responsibility for the fire, government has long blamed separatists in the Anglophone region – north west and south west regions for being behind the attacks.

Recent reports have also claimed that Cameroonian soldiers have also been complicit in attacks on facilities they suspect were harbouring separatist fighters.

Separatists began a call for independence from French majority Cameroon after their calls against marginalization in 2017 was met with a brutal government crackdown.

Since October 2017, they have engaged in guerilla-style attacks on government forces in a war that has seen Yaounde double up its efforts to crush the rebellion.

Leaders under the so-called Ambazonia Republic – name of the nation they hope to establish – have been arrested and are currently before the courts facing treason charges.