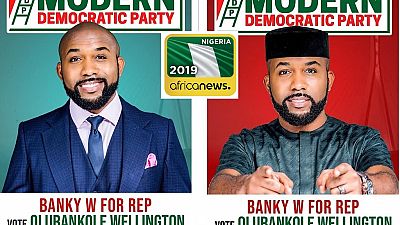 He is a pop star in Nigeria with millions of followers on social media, having achieved success as a singer, rapper and actor. And yet with no previous political experience whatsoever, 37-year old Banky W is putting his showbiz career on hold for a chance to represent the people of Eti-Osa.

Banky W., full name Olubankole Wellington, has neither political experience nor heavyweight backing but he does not let this faze him.

His stated goal is to “inspire” a young generation of Nigerians to bring dramatic change to a country struggling with systemic corruption, poverty, and jihadist violence.

It is time to get into the system to fix it.

“Together, we are stronger than any rich or corrupt politician. Together, we can make it!” the performer tells his supporters.

Banky W. has said he wants to open an office in Eti-Osa — the constituency he is hoping to represent — where voters will be able to demand accountability for public money spent, and explain their needs.

“The majority of us cannot even tell who are their representatives, how can politicians be held accountable to their voters?” he said.

SUGGESTED READING: A quick look at what’s at stake in Nigeria’s 2019 General Elections

“Most of the people don’t even vote for their legislators. Parties just have to activate their base by giving them a few thousands nairas and they win,” he told AFP.

Instead of cash for bribes, Banky W. is taking nurses along with him during campaigns, offering free medical check-ups to locals.

Employing more doctors and nurses in the area is another of his election promises.

What are Banky W’s chances?

“Usually, when we see other candidates, it’s only on TV or on billboards but Banky is a simple guy, we love him!” exclaimed Charles Opera, a 28-year-old job-seeker, as he took a swig from a bottle of beer.

With his clean-shaven head, immaculately groomed moustache and beard, and fashionably large sunglasses, Banky W. may look every inch the star.

But he knows that getting elected is an uphill battle. In Nigeria, political patronage, and money are key to success in public life.

In Eti-Osa, a constituency of nearly two million voters, he is up against a candidate from President Muhammadu Buhari’s ruling All Progressives Congress party.

His opponent is the son of an ex-minister who retains much influence.

“Banky does not stand a chance, his party has neither the financial means nor the structure” to carry it first over the finish line, said one seasoned political commentator.

“But he is getting into the game. Approaching 40, he wants to rebrand himself, as there is a lot of money in politics,” he added.

Who is Banky W?

Banky W. was born in the United States to Nigerian parents — an engineer father and church pastor mother.

He created his first music label during his studies in New York, and moved to Nigeria in 2007.

Here he found success making rap, pop, and R&B music, and as an actor in several movies produced in Nigeria’s “Nollywood” film industry.

“All what we young people do is complain on Twitter or Facebook,” Banky W. tells his detractors. “It is time to get into the system to fix it.”

All that is on the backburner as he hopes to win a seat in the House of Representatives for the Modern Democratic Party (MDP), which was only created last year.

The party’s platform includes introducing free and compulsory primary education in a country where an estimated 13 million children do not go to school and the creation of vocational training centres to equip people with employable skills.

With a few notable exceptions, Nigerian artists very rarely cross over from the vibrant music scene into politics.

Usually their lyrics focus on topics like money, champagne and strippers but Banky W. says it’s time for young people to get involved.