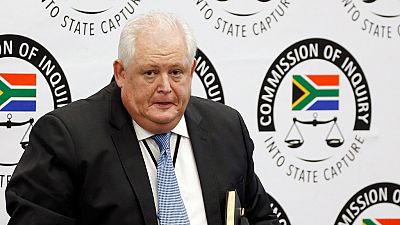 South African police arrested five people, including a witness at a judicial inquiry into alleged influence peddling, on charges of corruption and fraud in the awarding of government contracts, a police spokesman said on Wednesday.

The five appeared in a Pretoria court and were each granted 20,000-rand bail. The case has been postponed to the March 27.

One of those arrested was Angelo Agrizzi, a former executive of a private company who testified for more than a week on how he bribed politicians and bureaucrats to secure government contracts for his company.

The five are charged with misappropriating about 1.6 billion rand ($44.5 million). “These arrests are a culmination of many years of investigations,” said Hangwani Mulaudzi, the spokesman for the Hawks police unit.

Warrants were issued for the arrest of two others. One is overseas and the other is in the coastal city of Port Elizabeth, Mulaudzi said.

The arrests are linked to contracts awarded by the correctional services department to services company Bosasa Operations, now know as African Global Operations.

The inquiry where Agrizzi testified are public hearings on claims that corporate interests that include the Gupta brothers — the heads one of the country’s biggest conglomerates — unduly influenced former President Jacob Zuma over political appointments and winning contracts.

Zuma and the Guptas deny wrongdoing.