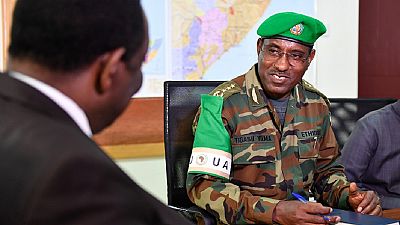 The African Union Mission in Somalia on January 31 announced a new Force Commander to lead its troops in the fight against Al Shabaab insurgents.

Lt. Gen. Tigabu Yilma Wondimhunegn from Ethiopia, took up office, from Lt. Gen. Jim Beesigye Owoyesigire, who has served in that capacity since January 2018, AMISOM said in a statement.

AMISOM’s political head, Francisco Caetano Madeira at a handing over ceremony stressed that there was work to be done in rooting out the insurgents but said he had faith in the abilities of the new commander.

“The task ahead is enormous, but I am very confident that you can do it,” he said. For his part, the commander said: “This Mission is a challenging one, but we are up to the task.”

Ethiopia has in the past refused to assume AMISOM command unless some of their soldiers are deployed in Somali capital, Mogadishu, a journalist with VOA said citing reliable sources.

Previous Somali governments its is said have argued there were enough AMISOM soldiers already in Mogadishu that other parts of the country under the insurgents control needed to be taken back. It is not known under which arrangements the current move was made.

Ethiopia has over 4,200 soldiers serving as part of AMISOM. An unspecified number of Ethiopia National Defense Force, ENDF, soldiers also operate in Somalia under “bilateral arrangements” between Mogadishu and Addis Ababa.

Brief about the new Commander

Gen. Tigabu has 34-years experience in the military and has served the Ethiopia National Defence Forces (ENDF) in several capacities, including as Division, Brigade, Battalion, and Company Commander.

Prior to his appointment, he served as a member of the Defence Council and Head of Defence Logistics Main Department, where he was instrumental in planning, delivery, generation and integration of the Defence Capability, among others.

He holds a Masters degree in Business Administration, a degree in Leadership and Military Science and a Diploma in Law.