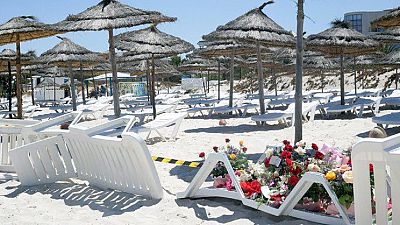 Seventeen people went on trial Tuesday over Tunisia’s deadliest extremist attack, a massacre at a Mediterranean resort in 2015 that killed 38 people, most of them British tourists.

The trial of the attack of Sousse which took place in june 2015 and killed 39 people, mostly tourists is starting again in Tunis. Not a lot of media outlets are present. The other trial of Bardo museum attack showed links between the 2 attacks and their organization. #Tunisia pic.twitter.com/IOI2Ihg5jL

The judge read out a report detailing what happened on June 26, 2015, in the coastal city of Sousse: How attacker Aymen Rezgui walked onto the beach of the Imperial Hotel and used an assault rifle to shoot at tourists in lounge chairs, then continued onto the hotel pool before throwing a grenade into the hotel.

Rezgui, a Tunisian student who trained with Libyan militants, was killed about 15 minutes later by police, the judge said. The Islamic State group claimed responsibility for the attack.

Rezgui’s autopsy showed he was under the effect of an illegal drug as well as medications, according to the judge.

The trial has been postponed several times at the lawyers’ request. It reopened Tuesday in Tunis, more than three and half years after the attack.

All the defendants deny any direct role in the attack.

Some of the defendants face potential capital punishment for charges of premeditated murder, threatening state security and belonging to a terrorist-linked group.

Some of those who testified acknowledged ties to the man considered the orchestrator of the attack, Chamseddine Sandi, saying he asked them to case out the area ahead of time. One said he sent Sandi photos via the internet of potential targets, including foreign businesses based in Tunis.

Beach resort attack trial resumes in Tunis – More than 40 people are returning on trial over Tunisia’s deadliest attack in the sea resort of Soussehttps://t.co/3fUR80JUnA

Defendant Mahmoud Kachouri said he was a classmate of Rezgui’s and they used to have coffee together. Still he insisted “he never talked to me about the operation he was planning.”

The 17 on trial are among some 40 people overall suspected of involvement in the attack, according to defense lawyer Hanene Khemiri. They include six security agents who are accused of failing to prevent or stop the attack.

Khemiri said some of the defendants were tortured by police.

In addition to the massacre at the beach resort, Tunisia suffered two other major attacks in 2015. At the famed Bardo Museum, 22 people were killed by extremists while 12 perished in the center of Tunis on a bus carrying presidential guards.

The Islamic State group also claimed responsibility for those attacks, which, along with the attack at the Imperial Hotel, devastated the country’s tourism sector as travel agencies pulled out and governments issued travel warnings.

Tourism has since partially bounced back after Tunisia’s government implemented a series of measures aimed at securing popular destinations in the country.

The trial resumes on February 5.