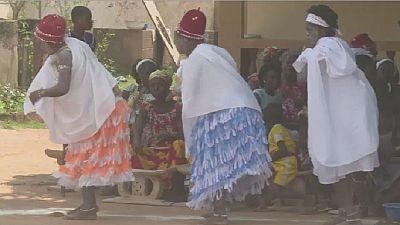 To the sound of tam-tams and bells, a dozen young girls dressed in white, their bodies coated with flour, dance in a courtyard in eastern Ivory Coast: they are destined to become “komians”, healers and fortune tellers.

A single school has been teaching this art for a quarter of a century, and today it is praying for its own survival.

In the Akan culture, which is practiced by 25 million people, mainly in eastern Ivory Coast and in neighbouring Ghana in the famous Ashanti kingdom, the Komians are consulted for their knowledge of medicinal plants but also for their “power” to ward off evil and predict the future. Without their intervention, no enthronement of a king or chief can take place.

“The Komians have a sanctifying role, it contributes to the cohesion and stability of our regions,” Pascal Abinan Kouakou, Ivorian Minister of Employment Modernisation and himself grandson of a famous former Komian, Akua Mandjouadja said.

The Komians have a sanctifying role, it contributes to the cohesion and stability of our regions

Thousands of women in Ivory Coast and Ghana work as healers, a profession that is not hereditary or improvised: you train to become one.

There is also school for this purpose: the Aniansué Adjoua Messouma Kômians Initiation Centre (CIKAMA), founded in 1992 and recognised by a ministerial decree since 2014.

It takes about twenty students each year and trains them for three to seven years in the study of medicinal plants, the settlement of family disputes, but also in traditional dances or household work in particular.

But this school, which receives no public aid and does not require any financial participation from students, is struggling to survive today and hopes to find a sponsor to continue – or even expand.

“We are told that we will be helped. But so far, since 1992, no one has helped me. That’s why I currently want to stop, because sometimes I receive more than 22 students, all of them in my care,” deplores Adjoua Messouma, the school’s founder said.

Built on 1,600 square meters , the school has two sanctuaries where many sculptures are on show. In the centre of its large courtyard surrounded by houses, stands a large mango tree.

But the walls have not been repainted in a long time and most of the installations have deteriorated over time.

In addition to the students in training, who generally live on site, the school receives many patients patients suffering from cancer, infertility, mental disorders, epilepsy… who come to be treated by komians.

Jealous husbands” also come to see them “for stability in their relationship”, or women for a “good husband”, explains Ms. Messouma.

After a consultation, a shopkeeper, Yvonne Ezan, explains: “I was diagnosed with an appendicitis that I want to treat with plants.”

“Help us! Help us! We sleep under the stars. We don’t have any dormitories while we receive dozens of patients every month…”, says Adjoua Messouma, draped in her multicolored loincloth.

Once trained, qualified fetishists can settle in their villages and work there, while sometimes keeping another activity, as market saleswomen.

“Without the komians, without our medicinal leaves, some would be nothing,” says the school’s founder, who is featured prominently in the book of the Spanish writer and photographer Jordi Esteva “Viaje Al pais de las Almas” (Journey to the land of souls), dedicated to the animist world in Africa.

However, the place of the Komians in modern society is being questioned by their opponents, particularly the evangelical churches, which are increasingly denouncing obscure ancestral practices.

“Today, we are seen as the devil incarnate,” deplores Léonie Kouamé, 22, who put her university studies on hold to “study and commune with geniuses” and become a Komian.

In the sub-prefecture of Amélékia, between the large city of Abengourou and Aniansué, about twenty healers sound the alarm bell.

They lost one of their main supporters, the Ivorian writer Jean-Marie Adiaffi, who won the 1981 Grand Prix d’Afrique noire who died in 1999.

“Since his death, we no longer have any advocates,” says Komian Eba Kouakou, in her sixties, with her body decorated with dozens of grey paint.

Adiaffi, committed to the modernization of African religions, had coined the word “bossonism” to describe the Komian religion. The “bosson” (genius) is a deity incarnated by statuettes, rivers, mountains or so-called sacred forests. The population loves it in most African villages.

For Minister Pascal Abinan Kouakou, who recently became President of the Regional Council of India (East), where there are many Komians, “if we are not careful, the Komians, this culture inherent in our society, risks disappearing”.

He deplored the “lack of a national policy to promote this cultural heritage” and promised to include the Aniansué school in “a tourist circuit that would allow the establishment to benefit from (economic) benefits and develop”.

In the midst of disciples, the Komian Eba Kouakou affirms, determined: “We are not afraid (…) and we are not ready to give up”. The Komians will “never disappear.”