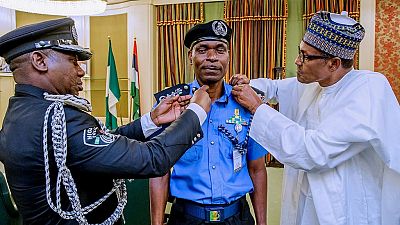 Nigeria’s Acting Inspector General of Police, Abubakar Mohammed Adamu, has tasked members of the force to remain steadfast and resolute in keeping the peace during upcoming polls in February and March this year.

The Ag. IGP who was appointed earlier this week stressed that as the main election security management body, he was committed to leading the force to deliver professional and stern policing to all citizens across the country.

He however warned people he described as misguided political actors who could attempt to disrupt the peace. He cautioned such persons to desist from such acts because it was going to land them in trouble.

He said in his inaugural address published on Friday: “I am confident that we have the operational capacity to ensure the success of both exercises, I am not unaware of the possible security threat that some misguided political actors and their followers may attempt to pose during the general elections.

“To such elements, I must sound a note of warning that as a nation, we have had enough of electoral violence.

“Hence while the Nigeria Police under my watch shall work with the Independent National Electoral Commission and sister security agencies in guaranteeing a peaceful and secure space for all political parties and the citizens to freely exercise their electoral rights, we shall not hesitate to identify, isolate and bring to deserved justice any person or group that attempts to threaten our sacred democratic order.

“To the unrepentant felons that may want to put our common will to test, the message is being relayed here loud and clear that in securing the law abiding citizens during the elections, we shall not hesitate to deploy our potent assets to deal firmly and decisively with electoral deviants.

“Consequently i call on political actors to assist the Police and other law enforcement agencies in sustaining the gains recorded in our democratic journey.

“They should always remember that politics is a game guided by rules and it behooves them to play within the dictate of such rules.”

First, is the conduct of the Presidential and National Assembly elections on 16 February, 2019 and second is the Governorship, State Assembly, and Federal Capital Territory Area Council Elections on Saturday 2nd March 2019.

The main race is for the presidency, even though there is a crowded field of over 70 candidates, the top aspirants are incumbent Muhammadu Buhari who is seeking a second and final term against ex-veep Atiku Abubakar leading the main opposition Peoples Democratic Party, PDP.