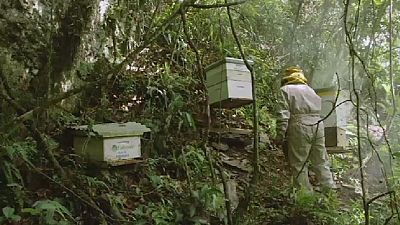 Exalto Mamani, a coca leaf grower, sprays his fields in the Nor Yungas region of Bolivia with pesticides. The practice threatens the environment, primarily bees.

Mamani, whose plots are scattered in terraces on the steep slopes of the high tropical forest recognizes the damage done to nature, but says he has no choice.

“Among coca producers, many of us are aware that we are affecting the environment with these chemicals. But we have no other alternative because the coca keeps us and our families alive,” he says.

Of the 20 hives I own, ten are in the process of producing normally and ten abnormally. Their population is much smaller

In this mountainous region in the east of the country, about 50 kilometres northwest of La Paz, coca production is not illegal. The leaves are sold for traditional uses, such as chewing, tea making, ritual ceremonies…

“Pesticides are used to control pests because they eat coca in small pieces, and this damages our economy,” says the farmer. The chemicals include a small moth and a fungus that are harmful to plantations.

According to the latest United Nations report, Bolivia has 24,500 hectares of coca cultivation (+7% over one year). The country is the third largest grower of the plant, behind only Colombia and Peru. In addition to traditional uses, between 35% and 48% of this coca is used for cocaine production.

“Coca growers are making massive and intensive use of chemical pesticides that directly affect the health of bees,” says René Villca, a beekeeper in the area north of La Paz.

“Of the 20 hives I own, ten are in the process of producing normally and ten abnormally. Their population is much smaller,” he says.

Miguel Limachi, an entomologist at the Mayor’s University of San Andrés in La Paz, is sounding the alarm about the progress of the cultivation of the small green leaf.

“The area under coca cultivation has expanded and the primary forest has shrunk alarmingly,” he says.

“A single crop is more affected by insects or fungi because there is no longer any primary vegetation cover, there are no longer any biological control agents,” he adds. “We must therefore use more pesticides, in higher concentrations”.

In addition to coca plantations, pesticides are also used on coffee or tropical fruits.

As has been demonstrated elsewhere in the world, the effects of chemicals on bees are irreversible and mainly affect their motor and spatial abilities.

“As these are social and highly organized insects, when their nervous systems are affected, their behaviour changes into irregular behaviours that lead to double energy expenditure and disorganization in the colony,” explains Miguel Limachi.

And as elsewhere, farmers who handle these products are also affected by this pollution.

Pesticides “persist in the soil, on the surface of plants and naturally contaminate all organisms present. The farmers themselves, their families and the fauna of the forest,” the academic recalls.

For Exalto Mamani, breaking out of this vicious circle seems ever more difficult. “Today, with climate change, pests are increasing and we need to use more chemicals,” he says.