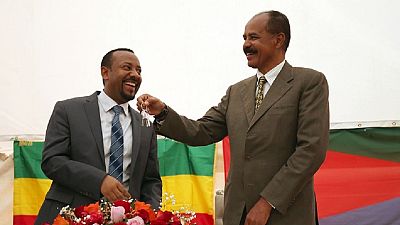 The year 2018 proved crucial for the wider Horn of Africa region but more so for Eritrea which had long been branded a reclusive nation prior to the events on June 2018 and onwards.

2018 thrust the country into the major news headlines. President Isaias Afwerki engaged more with his counterparts in the region and Asmara became a diplomatic hub of sorts – hosting regional leaders back-to-back.

As part of our review of the year, we look back at a momentous year for Eritrea at home, across the region and the world over. Here are our top five news items on Eritrea.

The news that Ethiopia was ready to abide by a border ruling between the two neighbours was received with skepticism by people on both sides.

But that doubt evaporated when Ethiopian Prime Minister Abiy Ahmed flew into Asmara and in July 2018 signed a peace and cooperation deal with President Isaias Afwerki.

Not only has it opened the two countries and its people up to each other in different areas, its effect has been concretely felt across the wider region. Eritrea has since made peace with Somalia and relations with Djibouti are being sorted out.

After years of a territorial and prisoner-of-war standoff, a historic meeting between the leaders of Eritrea and Djibouti was arranged under the auspices of the Saudi Arabia government.

The then Saudi Arabia foreign minister, Adel bin Ahmed Al-Jubeir said the meeting between Afwerki and Djibouti’s Ismail Omar Guelleh in Riyadh: ‘opens a new page to promote peace and stability in the region.’

Djibouti and Eritrea had weeks earlier normalised relations after a delegation of Eritrean, Somali and Ethiopian foreign ministers initiated dialogue to resolve the long-standing border dispute.

After almost a decade, the U.N. Security Council in November unanimously voted to lift an arms embargo and targeted sanctions on Eritrea after the latter made peace with Ethiopia and Djibouti.

There had been a strong groundswell of calls through the region demanding that the said sanctions be lifted. It took a shift in position by the United States for the final decision to be reached.

Eritrea whiles soaking international praise for their resilience in the face of the sanctions insisted that they were entitled to some sort of compensation for sanctions it had long held were unjust.

The United Nations Human Rights Council in October elected a new set of representatives to serve three-year terms. In all, 18 countries were elected across the world.

The African representatives who made it were: Burkina Faso, Cameroon, Eritrea, Somalia and Togo. The move however attracted the ire of political and human rights groups who insist that Eritrea, Cameroon and Somalia had no business serving on the Council given their current rights record.

Eritrea in the aftermath acknowledged its human right issues and promised to right those wrongs in due course. Eritrea is a known jailer of dissidents – political, media, religious.

The United Nations rapporteur has repeatedly reported of arbitrary arrests and detention. Asmara has most times remained mute or dismissed such reports.

September: Freedom of movement after opening of border crossings

To mark the Ethiopian New year, border crossings between the two countries were finally reopened after decades as Abiy and Afwerki were joined by top government officials at two border points, Zalambessa and Bure.

The event kick started a freedom of movement between peoples of both countries. But even as trade from the Ethiopian side came into Asmara and other major Eritrean cities, a refugee influx was going the other way.

The most recent report indicates that the crossings have been restricted on both sides of the border. The reopening of borders also kicked into gear a freedom of movement even within the country.