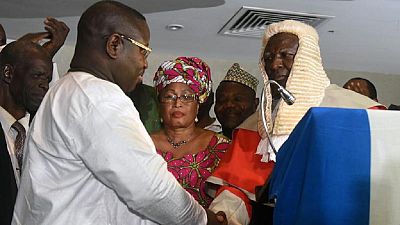 Sierra Leone’s Chief Justice, Abdulai Hamid Charm, has resigned his position a statement from the presidency confirmed on Wednesday.

President Julius Maada Bio has since nominated a replacement in the person of Justice Desmond Babatunde Edwards. The nomination has led to a recall of a special sitting of parliament to vet the nominee.

Charm was appointed by former president Ernest Bai Koroma, who stepped down after his second and final constitutionally mandated term earlier this year.

He swore into office Maada Bio on April 5, after the former junta leader was declared winner of a poll run-off. Maada bio beat the then ruling party’s candidate and foreign affairs minister, Samura Kamara.

Political watchers have wondered whether the former CJ was forced out of office as is usually the case when a new president emerges after an election.

Local media portals had also recently reported that government had asked the CJ to make sweeping changes to the judiciary including the retirement of senior apex court judges to make way for new appointments.

He is reported to have disagreed with the position of government this opting to resign his position. Many Sierra Leoneans according to reports were not entirely surprised by the development.

His appointment was approved by Parliament on 15 January 2016, and was sworn in as Sierra Leone’s Chief Justice on 21 January 2016.

#SierraLeone’s Chief Justice, Abdulai Cham has resigned, according to a press release from State House. It’s not clear whether he jumped or was pushed. The president has appointed Justice Desmond Babatunde Edwards as his replacement.