Odinga, Obasanjo, others discuss role of ICT on African elections 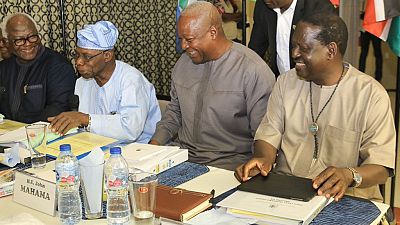 Dubbed the The High-Level Meeting on ICT on the Electoral Process in Africa, the event was held at the Olusegun Obasanjo Presidential Library in Abeokuta, Ogun state in southwest Nigeria.

According to Odinga, the meeting touched on mitigating the disruptive applications of ICT on elections. The former PM was a victim of technological manipulation during Kenya’s 2017 general elections.

The coalition he led into the polls managed to overturn the results at the Supreme Court but boycotted the re-run ordered by the court claiming the elections body, IEBC, had not adequately implemented orders of the court.

After swearing himself in as the ‘People’s president,’ he reached an agreement with President Uhuru Kenyatta. Both rivals opted to unite and heal the nation divided after the polls.