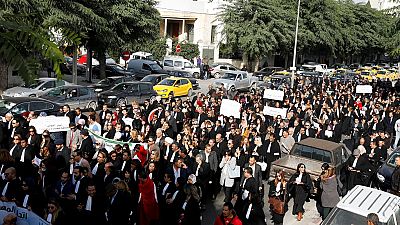 Hundreds of lawyers and doctors in Tunisia protested on Wednesday against a new law that will force them to disclose their salaries as part of a government bid to raise taxes.

The North African country is under pressure from foreign donors to increase tax revenues to cut a budget deficit.

Parliament passed on Monday a bill which allows the government to force doctors and lawyers to disclose salaries. Both professions currently do not need to do this due to professional secrecy rules, which officials say is used by some to avoid tax by understating their actual income.

Hundreds of lawyers protested in front of the prime minister’s office holding up banners saying “professional secrecy is a red line.”

The goal of the government is to strike free professions, eliminate them and weaken them by all means,” said Amer Mehrazi, the dean of lawyers in the protest.

Some lawyers on Monday staged a brief strike in several courts.

A government official told Reuters that the law will create more tax transparency and ensure justice doctors and lawyers paid their fair share of tax.